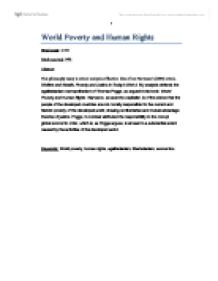 World Poverty and Human Rights Philosophy Essay. This philosophy essay is critical analysis of Section One of Jan Narvesons (2005) article, Welfare and Wealth, Poverty and Justice in Today's World. My analysis defends the egalitarianian cosmopolitanis

World Poverty and Human Rights Word count: 2,534 Mark received: 76% Abstract: This philosophy essay is critical analysis of Section One of Jan Narveson's (2005) article, Welfare and Wealth, Poverty and Justice in Today's World. My analysis defends the egalitarianian cosmopolitanism of Thomas Pogge, as argued in his book World Poverty and Human Rights. Narveson, an anarcho-capitalist, is of the stance that the people of the developed countries are not morally responsible for the current and historic poverty of the developed world, drawing on libertarian and mutual advantage theories of justice. Pogge, in contrast attributed the responsibility to the corrupt global economic order, which is, as Pogge argues, is at least to a substantial extent caused by the activities of the developed world. Keywords: World poverty, human rights, egalitarianism, libertarianism, economics. Critical Analysis of Section one. Narveson's approach to the problem of world poverty is undoubtedly libertarian. Pogge as an egalitarian heavily influenced by the work of John Rawls has quite opposing stance to Narveson in many ways. Narveson's first section, which this essay focuses its critique on, deals with question of whether we are morally obligated to respond to the problem of world poverty. He is the opinion that we, the ordinary people of the developed world, are not morally responsible and that in fact the egalitarian standing is harmful to human kind on a moral level. This essay will evaluate Narveson's section one against the work of Pogge. Narveson dismisses traditional egalitarianism as both "irrational" and "counterproductive", and as being rarely defended critically by philosophers but rather taken as an unquestionable doctrine. ...read more.

It subjects all person to the same fundamental moral principles. 2. These principles assign the same moral benefits and burdens to all. 3. These fundamental moral principles are formulated generally so not to privilege or disadavantage certain persons or groups arbitrarily. However, Pogge is quick to point out that these conditions are not the be all and end all and moral universalism, in his view, cannot be defined formally. But instead be flexible by "plausible rationale" (p.100). So even here, there is no dogmatic moral realism being placed down by an apparent "god" as Narveson suggests (p.2). Egalitarians do not necessary follow such a moralistic stance, so Narveson's attempt at a critique in this respect is not justified. However despite the degree of reasonableness that Pogge attaches to his moral universalism, which makes it more palatable, this does not form a strong philosophical basis to his arguments. His attempts to gain more focus and definitions through examples but regardless, no logical foundations can be born of examples. It seems his stance is more based on moral intuitions which have advantages on its appropriate level of demandingness but has potential to fall into dangerous waters. Although this can have advantages such as its appropriate level of demandingness, it does have the potential to fall into dangerous waters when not based on logic. In section 1.5, Narveson accuses egalitarianism of violating the Pareto priniciple. However he does not elaborate exactly why this is immoral. Therefore it is difficult to challenge the logic of the argument. ...read more.

Pogge's retort might accept the idea of "no-person justice" (Narveson. P.3), arguing that it is the not the issue; the issue lies instead on the global plane. The situation is far more complicated that attempting to assign any blame to anyone. The fault lies with the unbalanced and susceptibility to corruption nature of the current global economic order. There may be a number of "underlying causes" and so one should "recognise interdependencies among causal influences and fluid transactions we between the classes" (Pogge, p.47). We are living in a world in which economics has diverged almost fully away from market economics. The role of politics in the generation of wealth is becoming increasingly important as is trust relationships between economic agents. Therefore it is difficult to identity of the owner of wealth. An egalitarian perspective is helpful here as the solutions they given reflect the true nature of the asymmetrical yet highly interconnected nature of the global economic order. Narveson's arguments do not contain a lot of fault, logically but the main problem is that his thesis is not applicable to the reality of today's world. His work assumes a notion of individualistic players who interact atomistically yet fairly with each other, ignoring the interconnectedness of today's world. On a concluding note, Narveson, states that it is likely that whatever progress the world's poor people have "managed is due to their interaction with the rich ones. Pogge's thesis argues passionately against this assertion, that the world's social institutions and the rules of the game will continue to result in severe inequality between nations that results in extreme poverty that almost certainly can be avoided. ...read more.