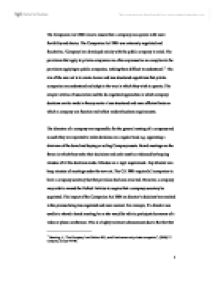 The Companies Act 2006 aims to ensure that a company can operate with more flexibility and choice. The Companies Act 1985 was extremely regulated and facultative; 'Company law developed mainly with the public company in mind. The provisions that apply to private companies are often expressed as an exception to the provisions applying to public companies, making them difficult to understand.'1 The aim of the new act is to create clearer and less structured regulations that private companies can understand and adapt to the way in which they wish to operate. The simpler articles of association and the de-regulated approaches in which company decisions can be made in theory create a less structured and more efficient basis on which a company can function and reflect modern business requirements. The directors of a company are responsible for the general running of a company and as such they are expected to make decisions on a regular basis e.g. appointing a chairman of the board and buying or selling Company assets. Board meetings are the forum in which they make their decisions and each must be evidenced by keeping minutes of all the decisions made. Minutes are a legal requirement. Any director can keep minutes of meetings under the new act. The CA 1985 required all companies to have a company secretary but that provision has been removed. However, a company may wish to amend the Default Articles to require that a company secretary be appointed. ...read more.

Default Article 46 set out the information which must be given when appointing a proxy in a private company. Under this article a company may require that proxy notices be delivered by a specific means of communication and may specify different forms for different purposes. There is a rule under s327 which states that a company cannot require notice of a proxy any earlier than forty eight hours before a meeting is to take place. This provision ensures that if a member finds he cannot attend a meeting 'last minute' then he can appoint somebody in that forty eight hour time slot. Any longer than that would be not be fair or practical as a member may find he cannot attend a meeting only a day or two before it is due to take place. If the minimum requirement for appointing a proxy was one week for example, then that member would not have the opportunity to exercise his voice during the meetings. A proxy is not able to vote by show of hands but does however have the ability to demand a poll vote under s282 (3) CA 2006, providing the member he or she is representing holds at least ten per cent of the shares. This is a highly significant provision as if a majority shareholder was unable to attend a meeting, he or she could still be assured that a resolution they were not in agreement with could not pass, as the fact they hold more shares ...read more.

It could be argued that such a restructuring would contravene the requirement for notice of a meeting but if all members/directors were present and able to assent to a decision being made then surely one amalgamated forum would provide for a more slick, resourceful and practical form of decision making. If the provision stated that the consolidation of the meetings was only to be used where directors and members were the same then the requirement for notice need not be contradicted, as it would still take place in larger companies where the directors and members were not identical. The CA 2006 has however failed to make such a provision, and as such directors who are members are required to go through the lengthy three staged decision process which can be deemed completely unnecessary. Although the Companies Act 2006 has brought about many changes to create a more efficient and clear approach to how companies in England and Wales operate, there are still some 'loose ends'. It can be said the new act has brought about a complete upheaval, especially considering the amendments of the articles of association, but upon closer examination the decision making process is still long winded and over regulated in many respects, e.g. the aforementioned decision making process of directors who are members. Although the new act can be criticised it has brought a forward change in the running of companies. It presents a step in the right direction in removing the more archaic and regimented provisions, although there is still a long way to go in perfecting the way in which company decisions are made. ...read more.