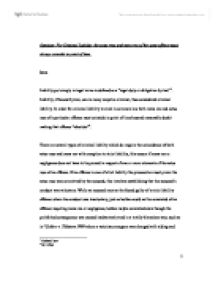 For Criminal Liability, the actus reus and mens rea of the same offence must always coincide in point of time.

Question: For Criminal Liability, the actus reus and mens rea of the same offence must always coincide in point of time. Intro Liability put simply in legal terms is defined as a "legal duty or obligation by law"1. Liability, if bound by law, can in many ways be criminal, thus considered criminal liability. In order for criminal liability to exist in common law both mens rea and actus reus of a particular offence must coincide in point of time beyond reasonable doubt making that offence "absolute"2. There are several types of criminal liability which do require the coincidence of both actus reus and mens rea with exception to strict liability, this occurs if mens rea or negligence does not have to be proved in respect of one or more elements of the actus reus of an offence. If an offence is one of strict liability the prosecution must prove the actus reus was committed by the accused, this involves establishing that the accused's conduct was voluntary. While an accused may not be found guilty of a strict liability offence where his conduct was involuntary, just as he/she could not be convicted of an offence requiring mens rea or negligence, he/she maybe convicted even though the prohibited consequence was caused inadvertently and in a totally blameless way, such as in "Callow v. Tillstone 1900 where a veterinary surgeon was charged with aiding and abetting the exposure for the sale by a butcher, of inedible meat. ...read more.

"Where an offence requires mens rea the prosecution must prove that the accused had mens rea at the time he did the act which caused the actus reus". Referring back to the case of Jakeman 1982 where the defendant was carrying two cases of cannabis on a flight from Accra to London via Rome. Unknowingly the flight was diverted from Rome to Paris. The defendant rejected the importation of the cannabis thus did not claim her cases in Paris where it was then sent to London by French authorities where it was later discovered. The defendant was charged with being knowingly concerned in the importation of cannabis. The court then quashed her defence which stated that she had repented of her criminal intent at the time the cannabis left Paris for England. The courts stated that her 'state of mind at the time of the relevant acts are done' mattered most. Her relevant act was later defined as booking her luggage to London, where she intended it to arrive, therefore making the innocent agents in Paris who then sent it London, subsequently immaterial. Where an actus reus 2may be brought about by a continuing act, it is sufficient that the accused had mens rea during its continuance albeit that he did not have mens rea at its inception". Referring to the case of Fagan v Metropolitan Police Commissioner 1969 where the defendant accidentally drove his car onto the foot of a policeman. ...read more.

This is certainly so where the appellants subsequent actions which caused death ...In short, in circumstances such as the present ...the act which causes death and the necessary mental state to constitute manslaughter need not coincide in point of time."9 The problem in Le Brun can be expressed as an issue of causation, which is usually defined as the relationship between an act and the consequences it produces. It is a key element that must be proved before an accused maybe convicted of any crime. The original performed with mens rea, seen as the cause of death, every act after that is known as the unbroken chain of causation, and due to the lack of coincidence between actus reus and mens rea in this case, there is no need to rly on the transaction principle which is equally applicable to murder. In conclusion to this essay, we are able to say in respect to all the key factors discussed that 'actus reus' and 'mens rea' of the same offence must always coincide in point of time in order for criminal liability to exist. As said earlier, Criminal law does not seek to punish evil thoughts which would be seen as mens rea, but without an act to provide a sufficient actus reus, a crime would not be complete and thus liability for that particular crime, whatever its nature would be non-existent. 1 Oxford: law 2 M. Allen 3 Childs: Nutcases 4 Childs 5 Oxford 6 M. Allen 7 Oxford 8 M. Allen 9 Lord Lane CJ: M.Allen ?? ?? ?? ?? 1 ...read more.