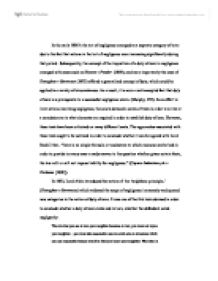 In the early 1800's the tort of negligence emerged as a separate category of torts due to the fact that actions in the tort of negligence were increasing significantly during that period. Subsequently, the concept of the imposition of a duty of care in negligence emerged with cases such as Heaven v Pender (1883), and more importantly the case of Donoghue v Stevenson (1932) offered a generalized concept of duty, which could be applied in a variety of circumstances. As a result, it is now a well-accepted fact that duty of care is a prerequisite to a successful negligence claim. (Murphy, 178). In an effort to limit actions involving negligence, the courts devised a series of tests in order to arrive at a conclusion as to what elements are required in order to establish duty of care. However, these tests have been criticized on many different levels. The approaches associated with these tests ought to be outlined in order to conclude whether it can be agreed with Lord Roskill that, "there is no simple formula or touchstone to which recourse can be had in order to provide in every case a ready answer to the question whether given certain facts, the law will or will not impose liability for negligence." (Caparo Industries plc v Dickman [1990]). In 1932, Lord Atkin introduced the notion of the 'neighbour principle,' (Donoghue v Stevenson) which widened the scope of negligence immensely and opened new categories to the notion of duty of care. ...read more.

(per Lord Atkin in Donoghue v Stevenson [1932]) The wide scope of the 'neighbour principle' led to attempts to refine it; to make it into a test that would prove effective at discovering duty of care in all situations, even though there seemed to be hesitation on the part of the legal profession. Lord Wilberforce then formulated the 'two stage' test in the case of Anns v Merton London Borough Council [1978]: First, one has to ask whether...there is sufficient relationship of proximity...in which case a prima facie duty arises. Secondly, if the first question is answered affirmatively, it is necessary to consider whether there are any policy considerations which ought to negative, or to reduce or limit the scope of the duty. Lord Wilberforce here conflated proximity with forseeability; that if there was a relationship of forseeability, that would lead to the assumption of proximity. In essence, the relationship between forseeability and proximity was blurred. Donoghue v Stevenson (1932) displaced the road of precedent and gave rise to the universal 'Anns' principle which was too narrow in scope. Lord Wilberforce's 'two stage' test created an expansion in the tort of negligence almost instantaneously and allowed people to recover for economic loss which was an area that never permitted recovery in negligence. The courts feared that this test might open 'flood gates,' as in the period of 14 years from 1970 to 1984 the categories of negligence appeared as though they were substantially expanding in the areas of psychiatric harm and pure economic loss. ...read more.

There will ultimately be differences between new cases and existing authority, and one has to take the latter into consideration even when applying the incremental approach. Lord Oliver warns the courts of the same issue: One must however, be careful about seeking to find any general statement which will serve as a touchstone for all cases...circumstances may differ inherently, and...there can be no necessary assumption that those features which have served in one case to relate the relationship between the plaintiff and the defendant on which liability depends will necessarily be determinative of liability in the different circumstances of another case. (Caparo Industries pcl v Dickman [1990]) Lord Atkin's 'neighbour principle' in Donoghue v Stevenson (1932) and subsequently the 'Anns test' produced a likelihood that there could be a formula in imposing duty of care. However, the criticisms towards these tests that arose out of cases such as Peabody v Parkinson (1985), Caparo pcl v Dickman (1990), Murphy v Brentwood D.C. (1991) mentioned above, lead one to agree with Lord Roskill's statement that, "there is no simple formula or touchstone to which recourse can be had in order to provide in every case a ready answer to the question whether given certain facts, the law will or will not impose liability for negligence." In imposing a duty of care, it is important to realize that every case at hand is different; that one general principle cannot possibly extend to all cases. It is imperative for each case to be judged on its own merits and its own set of facts in order to establish whether a duty exists. ...read more.