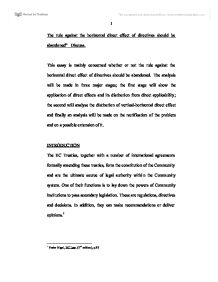 The rule against the horizontal direct effect of directives should be abandoned&quot; Discuss.

The rule against the horizontal direct effect of directives should be abandoned" Discuss. This essay is mainly concerned whether or not the rule against the horizontal direct effect of directives should be abandoned. The analysis will be made in three major stages; the first stage will show the application of direct effects and its distinction from direct applicability; the second will analyse the distinction of vertical-horizontal direct effect and finally an analysis will be made on the rectification of the problem and on a possible extension of it. INTRODUCTION The EC Treaties, together with a number of international agreements formally amending these treaties, form the constitution of the Community and are the ultimate source of legal authority within the Community system. One of their functions is to lay down the powers of Community institutions to pass secondary legislation. These are regulations, directives and decisions. In addition, they can make recommendations or deliver opinions.1 REGULATIONS-DIRECTIVES Regulations, the most common form of secondary legislation, are, according to Article 249(ex 189) EC, as amended by the TEU2, "binding in their entirety and directly applicable in all Member States". ...read more.

The ECJ held that she could appeal against the area health authority as the AHA was part of the state, thus having a vertical direct effect24. The result of this decision made a crucial distinction between public service and private body25. This can be seen in the later UK case of Duke V Reliance26 in which on similar facts a claim for compensation was lost by Ms Duke for being forced to retire earlier than men. Therefore between public and private employers within member states and between member states there is no uniformity in the application of Community Law out of the different concepts of what the state is and what private and public employers are27. Thus a 'horizontal' limitation was placed upon the scope of the direct effect of directives. Alternative ways of rectifying the problem Nevertheless, this was not the end of the matter, as the ECJ developed a number of alternative ways to reduce the impact of Marshall28. The principle of indirect effect was established in Von Colson29 concerning Art 6 of the Equal Treatment Directive (76/207). Here the ECJ allowed national law to be interpreted in the light of directives30. ...read more.