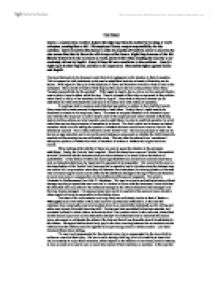 Tort Essay Gerry, a construction worker, injures his right leg when the ladder he is using at work collapses, causing him to fall. His employer Harry accepts responsibility for the accident. Gerry is told by his doctor to take six months off work in order to recover; he also warns him that in future he will always suffer from a slight limp because of the fall. Shortly before he is due to return to work, Gerry is hit when crossing the road by a car carelessly driven by Ingrid. Gerry's limp did not contribute to the accident. Gerry's right leg is further injured, and has to be amputated. Discuss his rights against Harry and Ingrid. The issue that needs to be discussed under the tort of negligence in this situation is that of causation. This is because for both defendants a duty can be established and also a breach of that duty can be shown. With regard to Harry, he is the employer of Gerry and therefore owes him a duty of care in the workplace. Harry admits a breach of that duty and this can be shown in the problem where Harry "accepts responsibility for the accident". With regard to Ingrid, she is a driver on the road and thereby owes a duty of care to others whilst driving. ...read more.

Bearing this judgement in mind, Baker v. Willoughby is viewed as an exception to the normal application of the 'but-for' rule, justified by the principle of fully compensating the plaintiff for damage tortiously inflicted. This can be criticised however, since the arguments of Lord Reid fail to do justice to the basic point of the but-for test, in that since the claimant lost his leg anyway through a separate and unconnected event, the defendant should not be held responsible for what happened after that point in time. The two events were not concurrent causes of the claimant's total disability, as the first event had nothing to do with the complete loss of the leg. The facts of this situation involving Gerry are sufficiently similar to those of Baker v. Willoughby since they both involve two separate, unconnected torts. Following the judgement in this case, Harry would still be liable for the loss incurred by Gerry, despite the second injury. As it was argued in Baker v. Willoughby there would only be a change in liability if before the assessment of the damages something happened which diminished the devaluation (i.e. a shortened life expectancy) and since there is not one in this instance, Harry would be liable for Gerry's loss of earnings for sixth months and for the permanent loss of ability of his right leg. ...read more.

This case, as with that of Fairchild v. Glenhaven Funeral Services Ltd had the problem of not knowing which factor (or breach of duty) could be determined to be the actual cause of the injury. It could be argued to be too remote to hold Harry liable for injuries that occur after the actual injury at work and so this argument of cumulative cause could be lost. However, Harry could be held responsible for the cumulative consequences of both injuries since it was his Gerry's initial incapacity that had prevented him from getting out of the way. The amount of damages that Ingrid has to pay may be reduced if it could be found that Gerry was contributory negligent in putting himself in that situation anyway. However this could be unlikely since it is quite reasonable that he would want to cross the road and his incapacity should not limit this. Otherwise, Ingrid's liability will not change. When looking at the possible situation of (ii) the facts of this situation are sufficiently similar to those of Jobling v. Associated Dairies Ltd. Because Gerry would have been crippled anyway then the but-for test when applied would absolve both Harry and Ingrid from paying for the harm after the point in time when the disease sets in which would be within a short space of time of Gerry returning to work. They would both still be liable for their injuries up until that point and have to pay the required damages. ...read more.

Overall, a good attempt to identify and apply relevant case law to the scenario.

The student should have considered using sub-headings to make things a little clearer. Also the discussion of factual and legal causation is slightly muddled.