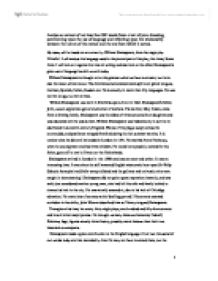 Analyse an extract of not less than 500 words from a text of your choosing, commenting upon the use of language and reflecting upon the relationship between the nature of the extract and the era from which it comes.

Analyse an extract of not less than 500 words from a text of your choosing, commenting upon the use of language and reflecting upon the relationship between the nature of the extract and the era from which it comes. My essay will be based on an extract by William Shakespeare, from his tragic play 'Othello'. I will analyse the language used in the pivotal part of the play, Act three, Scene three. I will look at it against the time of writing and also look at the effect Shakespeare's great use of language has left us with today. William Shakespeare is thought to be the greatest writer we have ever seen, but he is also the most written about. His chronicles and commentators spill over global tongues, German, Spanish, Italian, Russian etc. He is actually in more than fifty languages. He was not for an age, but for all time. William Shakespeare was born in Stratford-upon-Avon in 1564. Shakespeare's father, John, was an apprentice glover and tanner of leathers. His mother, Mary Arden, came from a farming family. Shakespeare was the eldest of three sons and four daughters and was educated until he was sixteen. William Shakespeare was indeed lucky to survive to adulthood in sixteenth-century England. Waves of the plague swept across the countryside, and pestilence ravaged Stratford during the hot summer months. ...read more.

Perhaps this is because her presence makes him conscious of her claim upon him and of his obligation to honour her requests. The lines just quoted indicate how much his image of her means to him: if he stops loving her, the entire universe stops making sense for him, and the world is reduced to "Chaos." The language is powerful in showing Othello's erratic love. His love is explicit and the irony of his words resonate through the rest of the scene. Iago's clever use of language have clearly had a direct impact on him. Desdemona remains dutiful, she is loyal and faithful. As she exits, her words are heavy with irony: "be it as your fancies teach you...". (Act 3, Sc 3). We are able to see how Othello fancies ultimately lead to Desdemona's death. The interchange between Othello and Iago after this exit is dramatically stunning. The use of language is extremely clever in its manipulation. Iago continues to manipulate Othello through his use of implication and insinuation. Iago uses the technique of repeating questions that Othello throws at him, to place more doubt in his mind. Iago does not directly assert allegations, instead he increases Othello's exasperation by saying little but implying much. Iago knows he must convince Othello of his wife's infidelity through suggestion, not actual words. ...read more.

The original story contains the bare bones of Shakespeare's plot. Shakespeare writes marvellously in 'Othello' and all of his plays. Harold Bloom argues that the whole of the English-speaking sensibility, has been moulded by him and from him it fed into all the other Renaissance languages. He was so inventive, his inventiveness has been described as a 'disease'. For example; 'knave', Shakespeare produced fifty different instances of it in his plays. The Oxford English Dictionary lists more than fourteen thousand Shakespeare quotations. There were more than three hundred film adaptions of Shakeseare in the twentieth century and I think it is safe to say almost every person in the United Kingdom will have read or seen at least one of his plays. This shows, not only his great impact at the time of his writing, but the continuous impact his work still has today. In his time, English was also beginning a great journey to America, where English discovered a new land of words. The Plymouth Pilgrims took with them flags, Bibles but also this remarkable and rich language. Shakespeare gave us a new world in words and insights which would colour, help, deepen and depict our lives in thoughts and feeling. He had to a great limit, exercised the most important faculty, the imagination. Word Count: 2149 End Notes: Crystal, D., (2002) The English Language, Penguin Croft, S., (2000) Literature, Criticism, and Style, Oxford http://www.shakespeare-literature.com/Othello/index. ...read more.