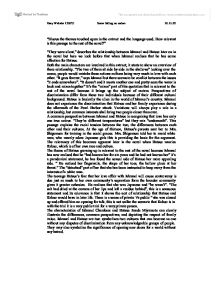 &quot;Discus the themes touched upon in the extract and the language used - How relevant is this passage to the rest of the novel?&quot;

"Discus the themes touched upon in the extract and the language used. How relevant is this passage to the rest of the novel?" "They were silent," describes the relationship between Ishmael and Hatsue later on in the novel but here we look before that when Ishmael realises that he has some affection for Hatsue. Both the main characters are involved in this extract; it starts to show an overview of there relationship. "The two of them sit side by side in the shallows" looking over the ocean, people would mistake these actions as them being very much in love with each other. ...read more.

A common perspective between Ishmael and Hatsue is recognizing that love has only one true colour. "They're different temperatures" but they mix "underneath". This passage explains the racial tension between the two, the differences between each other and their cultures. At the age of thirteen, Hatsue's parents sent her to Mrs. Shigemura for training in the social graces. Mrs. Shigemura told her to avoid white men, who merely adore Japanese girls this is providing the basis for the argument. The relevancy of this becomes apparent later in the novel when Hatsue marries Kabuo, which is of her own race and culture. The theme of Hatsue growing up is relevant to the rest of the novel because Ishmael has now realised that he ...read more.

There is a sense of private Vs public " she was closed up and offered him no opening for talk, this is not unlike the scenario that Kabuo is in with the trial it is a very public trial for a very private person. The characteristics of Ishmael Chambers and Hatsue Imada Miyamoto can clearly illustrate the differences, common perspectives, and depicting the respect of family value. Ishmael and Hatsue are two symbolizes two cultures that can become as one without any disputes of discrimination from any unknowledgeable groups of people. They may also symbolize the significance of opening new doors for a world without any hatred. Gary Webster 12BPD Snow falling on cedars 01.11.03 ...read more.