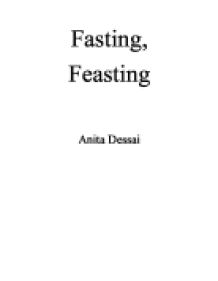 Fasting, Feasting Anita Dessai Themes Family Life Although the novel has action in two separate countries and has many characters, there is the central theme of family life that unites them all. In India, the immediate family has great importance; but the extended family also has an impact on the characters' lives. This is evidenced by the coming together of family members for securing bridegrooms and making wedding arrangements for Uma and Aruna. There is also huge family support and involvement related to times of sorrow, such as the coming together after the death of Anamika. The rituals for both these happy and sad occasions are marked with tradition and purpose. These elements seem to be sorely lacking in the Patton household in America. It is understood that the time period of Arun's stay with the Pattons encompasses only three months and does not represent a comprehensive look at the Patton family. ...read more.

Uma is a sad example of the needs of daughters being minimized for the good of the family, especially the male members. When Mama and Papa remove Uma from the convent school, it is the beginning of the end of Uma's hopes of ever learning more about the world or achieving any dreams. From that point, Uma's life takes on the role of proper subservience and indebtedness to her parents, especially in light of her failed marriage attempts. In contrast, Aruna, because of her beauty and social skills, succeeds in making a good marriage and living an affluent life. The author wants the reader to understand that life is usually easier for those women who are attractive and have pleasing personalities, despite the culture. In America, Mrs. Patton is just as subservient to her husband; although the initial restrictions were never an issue for Mrs. Patton, whom it is assumed had the right to choose her husband. Mrs. Patton was raised in a generation of girls taught to be good mothers and wives. ...read more.

In America, in the Patton household, food holds no such sacred place, but is more of a status symbol. For example, Mr. Patton grills fresh slabs of red meat almost every night, as do most of the other families in the neighborhood. To Mr. Patton, the overt preparation and consumption of the costly meat indicates Mr. Patton's ability to provide well for his family, as well as the importance of the neighbors witnessing his provisions. Unfortunately, Mr. Patton is oblivious to his family's emotional needs, evidenced especially by Mrs. Patton and Melanie. Mrs. Patton, who feels unneeded and unloved in her own home, shops every day and fills the cupboards and freezer with snack foods consumed by her disjointed family, symbolizing the emptiness experienced by all of the Pattons in spite of their zealous consumption. Melanie is the one who exhibits the most serious emotional deprivation, as exhibited by her bulimic behavior hopefully caught in time by the end of the novel so that Melanie may have the hope of better physical and emotional nourishment. ...read more.