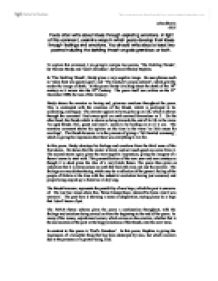 Poets often write about ideas through exploring emotions. In light of this comment, examine ways in which poets develop their ideas through feelings and emotions. You should write about a least two poems including the darkling thrush or gods grandeur, or

Poets often write about ideas through exploring emotions. In light of this comment, examine ways in which poets develop their ideas through feelings and emotions. You should write about a least two poems including the darkling thrush or gods grandeur, or both. To explore this comment, I am going to analyse two poems, 'The Darkling Thrush', by Thomas Hardy, and 'God's Grandeur', by Gerard Manley Hopkins. In 'The Darkling Thrush', Hardy gives a very negative image. He uses phrases such as 'when frost was spectre-grey', and ' The Century's corpse outleant', which give the reader the image of death. In this poem Hardy is talking about the death of the 19th century as it moves into the 20th Century. The poem itself was written on the 31st December 1899, the turn of the Century. Hardy shows the narrator as having sad, grievous emotions throughout the poem. This is contrasted with the emotions of the thrush, which is portrayed to be celebrating, and happy. ...read more.

The poem then gives an indication that it is every person on earth that feels this way, not just the narrator. The feelings are very disheartening, which may be a reflection of the general feeling of the people of Britain at the time with the industrial revolution having just occurred, and people being cooped up in factories all day long. The thrush however, represents the possibility of new hope, which the poet is unaware of. The last two verses show this. 'Some blessed hope, whereof he knew And I was unaware'. The poet here is showing a sense of desperation, saying please be a hope that I don't know of yet. The ABAB rhyme scheme gives the poem a continuation throughout, with the feelings and emotions being carried on from the beginning to the end of the poem. In many of the verses, enjambment occurs, which carries on the emotion, whether that is the sad emotion of the poet or the happy emotions of the thrush, onto the next verse. ...read more.

It gives the idea that man is ruining the earth for himself. The second stanza starts on a more positive note. The first verse is 'And for all this nature is never spent. It conveys the idea of new hope. It is showing that despite mans attempt to wreck the world, nature always returns to its original state. The last verse, 'World broods with warm breast and with ah! bright wings', gives the impression of the world reproducing. The poem starts off conveying emotions of despair and hopelessness, with man wrecking what was once a beautiful creation of God, but being left damaged and possibly beyond repair. The second stanza contrasts to this with the idea of fresh hope being given. The world that man has wrecked is repaired by the power, grace and grandeur of God. The rhyming couplets in the first stanza give the suggestion of heaviness as man goes through the world, while the ABAB rhyme scheme in the second stanza portrays the thought that things slowly start to return to their original state. Johan Stovin 6AN ...read more.