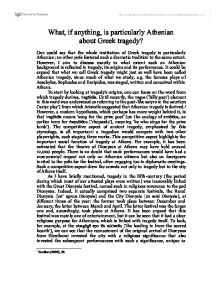 What, if anything, is particularly Athenian about Greek tragedy?

What, if anything, is particularly Athenian about Greek tragedy? One could say that the whole institution of Greek tragedy is particularly Athenian; no other polis fostered such a dramatic tradition to the same extent. However, I aim to discuss exactly to what extent such an Athenian background is reflected in tragedy, its origins and its performance. It could be argued that what we call Greek tragedy might just as well have been called Athenian tragedy, since much of what we study, e.g. the famous plays of Aeschylus, Sophocles and Euripides, was staged, written and conceived within Athens. To start by looking at tragedy's origins, one can focus on the word from which tragedy derives, tragoidia. Until recently, the tragos ('billy goat') element in this word was understood as referring to the goat-like satyrs in the saturikon ('satyr play') from which Aristotle suggested that Athenian tragedy is derived.1 However, a modern hypothesis, which perhaps has more weight behind it, is that tragoidia means 'song for the prize goat' (on the analogy of arnoidos, an earlier term for rhapsoidos ['rhapsode'], meaning 'he who sings for the prize lamb'). The competitive aspect of ancient tragedy, emphasised by this etymology, is all important: a tragedian would compete with two other playwrights, each staging three works. This competitive aspect highlights the important social function of tragedy at Athens. For example, it has been estimated that the theatre of Dionysus at Athens may have held around 12,000 people. ...read more.

Whilst its religious context deeply affected Greek tragedy as we know it, it is a very large step to suggest that such tragedy could not have emerged were it not for its Dionysiac background; we cannot make the unsubstantiated assumption that such dramatic festivals were experienced as 'religious' phenomena in any overarching sense. There is no doubt, too, that tragedy provided significant value in terms of emphasising the social integration of citizens with each other. The City Dionysia is thought to have originally been connected to the harvest and selection of crops, however, it soon also performed, as we have seen, social and political functions. It could be said that the tragic plays are 'straightforward quasi-fascist hymns to the state and to the solidarity of citizens'.6 Such a viewpoint may explain the ostensible lack of dissent that some critics have noticed in tragedy, e.g. that Antigone is universally regarded badly for going against her government. However, such a viewpoint is surely not tenable, to a great degree. Greek tragedy is often about portraying the Other and subversion is societally harmless ways: in fact, it could even be seen as a kind of pressure valve for what might be, if acted out in reality, socially harmful actions. There is, also, little evidence that ancient audience members always reacted to plays in similar ways, or even that they were expected to. On the other hand, Aeschylus' Persians (the only extant Greek tragedy focusing on contemporary issues) ...read more.

The intellectual environment of Athens, renowned throughout the Greek world, can ultimately be said to be strongly reflected in Greek tragedy. To conclude, it can be strongly argued that Greek tragedy is very much a product of its particular Athenian context. The competition at the City Dionysia fostered new talent and engaged the citizenry of Athens. Linked closely to that concept is the religious context in which the plays were performed that can be said to have aided social solidarity and performance. However, plays did not enforce a dominant ideology. In fact, tragedy may well have allowed citizens to be subversive in ways that they otherwise would not have been able. The strong Dionysiac element held the festivals together, however, we cannot suggest that such an element was anything other than contingent. Furthermore, there was a strong political aspect to the festival and its performances: it was one of the few times when so many Athenian citizens would have been in one place. The content of plays and reworkings of myths also owe a lot to their Athenian background: the mythological heritage of Athens was in many cases vital to the conclusion of tragic plots. Moreover, even the intellectual and philosophical environment of Athens can be seen reflected in tragic works. Ultimately, Greek tragedy would be little the Athenian background in which the performances took place and against which the institution defined itself. With the caveats I have discussed in this essay, tragedy can be seen as the ultimate 'manifestation of the Dionysiac spirit'. ...read more.