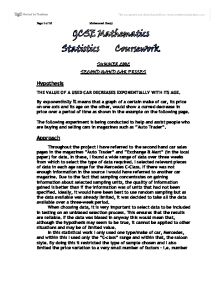 THE VALUE OF A USED CAR DECREASES EXPONENTIALLY WITH ITS AGE.

Byexponentially it means that a graph of a certain make of car, its price on one axis and its age on the other, would show a curved decrease in price over a period of time as shown in the example on the following page.

The following experiment is being conducted to help and assist people who are buying and selling cars in magazines such as “Auto Trader”.

Throughout the project I have referred to the second hand car sales pages in the magazines “Auto Trader” and “Exchange & Mart” (in the local paper) for data. In these, I found a wide range of data over three weeks from which to select the type of data required. I selected relevant pieces of data in each age range for the Mercedes C-Class. If there was not enough information in the source I would have referred to another car magazine. Due to the fact that sampling concentrates on gaining information about selected sampling units, the quality of information gained is better than if the information was of units that had not been specified.

I used standard deviation to explain the average spread of the values from the mean for each year.

ACTUAL MERCEDES DATA ANALYSED IN THE FORM OF STANDARD DEVIATION

The results gathered from the standard deviation information show that the spread of all the plotted figures is fairly small. This is also the case for the fifth year in the Mercedes car data, which means that even though the results are out of line, the plotted data is close together within a small price range.

The results shown above would have been more accurate if the same number of data points were available in each ‘year group’, and this would give a more accurate mean. This was noticed and the data for the VW Golf GTI was adjusted accordingly to see if there was any significant data. There may well have been, but more data points would have to be available for each year range.

The results for the VW Golf GTI show that, with fewer data points for each range, the standard deviation tends to be lower. This implies greater accuracy, but a greater range of points may show that this is not the case. On the other hand, the limitations of the data would improve the level of accuracy.

Also, all the data used is from two particular types of newspaper/magazine. Not everyone who has a Mercedes C-Class to sell decides to advertise in these particular publications. Therefore, if I were to repeat the experiment or develop it further, I would have to take into consideration data from other newspapers/magazines.

Using spearman’s rank may produce a more accurate line of best fit. If there was more time to conduct this experiment, I would have investigated this area.