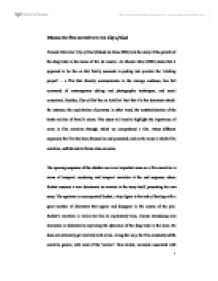 Discuss the film narrative in the City of God

Discuss the film narrative in the City of God Fernado Meirelles' City of God (Cidade de Deus 2002) tells the story of the growth of the drug trade in the slums of Rio de Janeiro. As Macelo Melo (2004) states that it appeared to be the on that finally succeeds in putting into practice the 'retaking project' - a film that directly communicates to the average audience, has full command of contemporary editing and photographic techniques, and social conscience. Besides, City of God has an Achilles' heel that it's few detractors attack: for instance, the exploitation of poverty, in other word, the aesteheticisation of the harsh realities of Brazil's slums. This essay will tend to highlight the importance of areas in film narrative through which we comprehend a film. Many different sequences the film has been focused on and presented; and on the ways in which film narration, unfolds and in forms mise-en-scene. The opening sequence of the chicken run is an important scene as a film narrative in terms of temporal reordering and temporal narration at the end sequence where Rocket assumes a new dominance as narrator in the story itself, presenting his own story. The spectator is accompanied Rocket, a key figure in the task of dealing with a great number of characters that appear and disappear in the course of the plot. ...read more.

Throughout the movie, many close-ups were used to describe the feeling of the actor. In the opening scene, there is a rotation shot on the football field. Numbers of shots were using the tilt camera angles. Such as the shot from the bottom where the kid were holding a gun on his hand, and the shot from the top in the crowded celebration party for Benny in the movie. Also, in a gang movie backward in order to capture those gangsters walking on the street and this helps to create an awesome feeling for the audiences. The theme of violence becomes apparent to the audiences from the outset of the film. This description illustrates to us that violence is a key feature in the film from the outset, and as we are taken through Meirelles' narrative violence is almost represented as normal, and acts as a backdrop to the city. The audience is constantly bombard with images of violence through the city as we are introduced to the characters byu the main character, Rocket. The film begins when he is nine years old, and this narration continues with his "neutral" view on the gang warfare. The reason we are leaf to deduce that Rocket's view is neutral is because throughout the movie, Rocket is always distinctly detached from the violence, and this is shown to us almost from the outset; when even from the narration in his youth, he clearly separates himself from the violence. ...read more.

"The violence never feels exploitative; the only thrill you feel is that of being in the hands of a masterful storyteller opening your eyes to a world you feel truly exists" (Caro,M.2003). It is clearly evident that Meirelles' direction has induced controversy; raising the question wether this representation is simply closely represented realism or simply excessive and gratuitous violence to titillate audiences. Narrative is important and could not be omitted in any single film, no matter that is an action, horror or romantic movie. To talk at length about narrative, it is beyond the scope of this essay. However, numbers of important points have been seen and discussed. According to City of God, temporal relationships, such as story order, duration and frequency have brought to the audience in another way by Rocket. There were many different shos that combined different segments, such as pan and tilt camera angles and the movement of the camera. In City of God, violence took an important place created by the director. This is a form of narrative. On the other hand, City of God also brings positive message to audience: Never give up when you face the difficulties in your life; fight and you will never survive, run and you will never escape. Reference List Caro, M. (2003), "The Chicago Tribune", Chicago Rainer, P. (Jan 2003), "New York Magazines", London/ New York, p23. ?? ?? ?? ?? 1 ...read more.

It is good that this controversy has been noted, but more is required: some reflection upon the difference between realism and reality, or the wider debate about the representation of violence in film, for instance. A couple of quotes from two newspaper film critics does NOT constitute thorough research into, and reference of, the wider debates concerning the representation of violence in popular media...