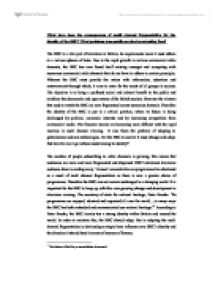 What have been the consequences of multi channel fragmentation for the identity of the BBC? What problems does public service broadcasting face?

What have been the consequences of multi channel fragmentation for the identity of the BBC? What problems does public service broadcasting face? The BBC is a vital part of television in Britain; its requirements mean it must adhere to a various spheres of taste. Due to the rapid growth in various commercial cable channels, the BBC has now found itself existing amongst and competing with numerous commercial cable channels that do not have to adhere to certain principles. Whereas the BBC must provide the nation with information, education and entertainment through which, it aims to cater for the needs of all groups in society. The objective is to bring a profound social and cultural benefit to the public and reinforce the democratic and open nature of the British society. However the viewers that used to watch the BBC are now fragmented across numerous channels. Therefore the identity of the BBC is put in a critical position, where its future is being challenged by political, economic interests and by increasing competition from commercial media. The financial strains are becoming more difficult with the rapid increase in multi channel viewing. It also faces the problem of adapting to globalisation and new technologies. For the BBC to survive it must change and adapt. But how far can it go without undermining its identity? The number of people subscribing to cable channels is growing, this means that audiences are more and more fragmented and dispersed. BBC's dominant television audience share is eroding away. Viewers' concentration on programmes has shortened as a result of multi channel fragmentation as there is now a greater choice of programmes. Therefore the BBC can not remain unchanged in a changing world. It is important for the BBC to keep up with this ever growing change and development in television viewing. The secretary of state for national heritage, Peter Brooke: "Its programmes are enjoyed, admired and respected all over the world....in many ways the BBC has both embodied and communicated our national heritage."1 According to Peter Brooke, the BBC clearly has a strong identity within Britain and around the world. ...read more.

The new generation of young people are less interested in conventional politics as said by the retired speaker of the House of Commons. "We believe that in the age of digital television it will not be sufficient for the BBC to offer only two mixed genre channels which are somehow supposed to meet the needs of everyone. That is not how audiences will want to receive television in the future. We need a more coherent portfolio of channels. However, as I've already said, people have an expectation of BBC channels in terms of quality which we have to meet. As we are inevitably constrained by money, this means we must limit the size of this portfolio." But there is another more important reason for limiting the number of channels we plan and that is the principle of universality. What universality means is making all our publicly funded services available in all homes. Universality has been one of the core principles of public service broadcasting in the past and should remain so in the digital age. It means that everyone regardless of race, creed or bank balance will have access to the BBC's services. For BBC ONE in particular this challenge comes at a difficult time when, partly as a result of under-funding, the channel is not doing as well as it should. As Chris Smith acknowledged in a recent interview in the New Statesman, we had very good Autumn and Winter schedules last year and we have some great programmes this autumn, including the adaptation of Kingsley Amis' Take a Girl Like You; William Ivory's new drama The Sins and Sir David Attenborough's new series State of the Planet. We need more of that kind of popular, quality programming. I believe we now live in a competitive world where the average simply isn't good enough. We need more of the very best. BBC ONE needs to have a greater impact on people's lives. It needs to be more modern, more in touch, more contemporary. ...read more.

Another consequence of multi channel fragmentation is that it brings up the question of whether the viewers should be able to choose for themselves. The Peacock report was important in pointing this out: "British broadcasting should move towards a sophisticated market system based on consumer sovereignty. That is a system which recognises that viewers and listeners are the best ultimate judges of their own interests, which they can best satisfy if they have the option of purchasing the broadcasting services they require from as many alternative sources of supply as possible."15 However this assumes that audiences are informed enough to judge for themselves. This partly takes away and replaces what the BBC stands for. Its identity is destabilized because its existence becomes questionable due to so many channels being available. It also becomes harder to justify the license fee on which the BBC is funded by. The BBC believes in a certain amount of risk taking and innovation, in fact it is part of their agenda. "Developments in broadcasting, especially the rapid emergence of new satellite and cable channels, are reducing the importance of these rationales."16 However, it could also have an opposite effect and increase the importance of the principles that the BBC sustains, or arguably is failing to sustain by adhering to commercial tastes. The BBC has to carry on customising itself to these changes. The main principles of the BBC will always apply and yet somehow new changes must be introduced. Public broadcasters might want to address the problem of declining audiences through a change in their schedules towards a programming of a more popular appeal. 1 The future of the bbc, a consultation document 2 Green, p.5 3 Green, p.13 4 Green, p.14 5 Green, P.14 6 Green, p.18 7 Green, P.19 8 Miller & Allen 9 Foster, p.11(intro.) 10 Tunstall, p138 11 Green, p.40 12 Green, p.40 13 Foster, p.4 14 Foster, p.4 15 Report of the committee on financing the bbc, p.133, para 592 16 Foster, p.10(intro.) ...read more.