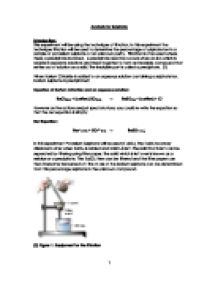 Analysis for sulphate. In this experiment the technique filtration will be used to determine the percentage of sulphate ion in a sample of potassium sulphate of an unknown purity.

Analysis for Sulphate Introduction: This experiment will be using the technique of filtration. In this experiment the technique filtration will be used to determine the percentage of sulphate ion in a sample of potassium sulphate of an unknown purity. Filtration is often used where there a precipitate involved. A precipitate reaction occurs when an ion which is soluble in separate solutions are mixed together to form an insoluble compound that settles out of solution as a solid. The insoluble part is called a precipitate. [1] When Barium Chloride is added to an aqueous solution containing a sulphate ion, barium sulphate is precipitated: Equation of Barium Chloride and an aqueous solution: BaCl2(aq) + (cation) SO4(aq) � BaSO4(s) + (cation) + Cl However as the actions are just spectator ions, you could re write the equation so that the net equation is simply: Net Equation: Ba2+ (soln) + SO42- (aq) � BaSO4 (s) v In this experiment Potassium Sulphate will be used (K2SO4). The K2SO4 however dissolves in after when BaCl2 is added and BaSO4 is left. The solid that is left can be separated by filtering using filter paper. The solid which is left over is known as a residue or a precipitate. ...read more.

Remember, the filtrate should be clear. Fold the filter paper over by folding the edges so that the precipitate is enclosed in a small parcel. Remove it from the funnel and place it into the weighed crucible. Using the Bunsen burner, place a clay triangle over it and mount the crucible containing the filter paper containing the precipitate. Turn the Bunsen flame down so the paper chars but remember, that you do NOT want it to burst into flames (otherwise some BaSO4 might be reduced to BaS). If the paper does burst into flame, burst a crucible cover momentarily over it to extinguish the flame. Heat the crucible more strongly. Heat with full intensity of the burner for about 5 minutes. You should be left with a white ash of barium sulphate. Allow the crucible to cool and then weigh accurately. Results: Weight of sample of Potassium Sulphate taken for analysis: Weight of empty weighing boat= 0.4466g Weight of boat + K2SO4= 0.9020g Weight of K2SO4= 0.4554g Weight of Barium Sulphate produced: Weight of empty crucible= 18.5091g Weight of crucible + ash (BaSO4) = 18.8362g Weight of BaSO4= 0.3271g Calculation of the experimental percentage of the value of sulphate on Potassium Sulphate: Moles= 1.04 x 10-3 To calculate the moles of Barium sulphate produced, you need to know the weight of Barium Sulphate and its molecular weight. ...read more.

This may have been the main source of error. Secondly, as much as the precipitate was made to be sure that none was lost throughout the experiment, there may have been a slight but very small chance that some precipitate may have not been obtained. If that was true, than it may have affected the accuracy of the results. The filter paper caught on fire slightly; this was only for a split second however it does contribute hugely to the fact that more precipitate many have been lost as some BaSO4 may have been reduced to BaS. In order to overcome this, the Bunsen burner could have been on an even lower heat. Conclusion: In conclusion, overall the experiment went quite well despite some accuracy flaws. However these can be overcome so that these flaws do not occur again. Apart from our huge percentage change, the experiment overall went well. What we found was that the calculation purity of Potassium Sulphate should have been around 55%; however, the value we obtained was 39.9%. The way in which this figure was obtained was by dividing the percentage of SO42- in the sample by the expected percentage of SO42- in the sample and then multiplying it by 100. Therefore overall you could argue that although percentage was found, it was not as accurate as it could have been. ...read more.