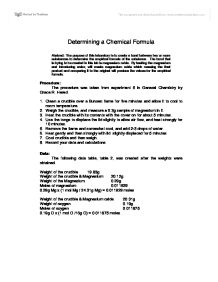 Determining a Chemical Formula Abstract: The purpose of this laboratory is to create a bond between two or more substances to determine the empirical formula of the substance. The bond that is trying to be created in this lab is magnesium oxide. By heating the magnesium and introducing water, will create magnesium oxide which massing the final product and comparing it to the original will produce the values for the empirical formula. Procedure: The procedure was taken from experiment 5 in General Chemistry by Grace R. ...read more.