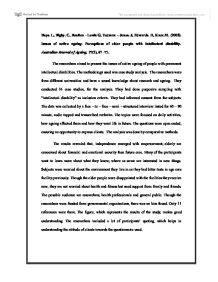 Critiques of five papers on the problems of aging published in Australian journals.

Buys. L, Bigby. C, Boulton - Lewis G, Tedman - Jones. J, Edwards. H, Knox.M. (2008). Issues of active ageing: Perceptions of older people with intellectual disability. Australian Journal of Ageing, 27(2), 67 -71. The researchers aimed to present the issues of active ageing of people with permanent intellectual disabilities. The methodology used was case study analysis. The researchers were from different universities and have a sound knowledge about research and ageing. They conducted 16 case studies, for the analysis. They had done purposive sampling with "intellectual disability" as inclusion criteria. They had informed consent from the subjects. The data was collected by a face - to - face - semi - structured interview lasted for 60 - 90 minute, audio tapped and transcribed verbatim. The topics were focused on daily activities, how ageing affected them and how they want life in future. The questions were open ended, ensuring an opportunity to express clients. The analysis was done by comparative methods. The results revealed that, independence emerged with empowerment; elderly are concerned about financial and emotional security then future care. ...read more.

They believed in "follow - up" not in the "initiation" of the anticoagulant therapy to the patient. Though there were more suggestions for Warfarin use in elderly, no nurse was interested for future education in the same field. The possible audiences for this are nurses and other health professionals, researchers and elderly. The weakness of his article is the non involvement of nurses and the data collection was done long time ago. The tables provided for the results are able to provide with the results of the study. The researchers developed a theme based analysis for the presentation of their findings. They included direct quotations to explore the mind of the nurses participated. Moreover, the study was all about nurses and a pioneer study with regards to nurses' perspective in aged care. Johnstone. M. J, Kaintsaki. O (2009). Population ageing and the politics of demographic alarmism: implications for the nursing profession. Australian Journal of Advanced Nursing, 26(3), 86 - 92. This scholarly paper examines the prejudices and politics framing "Population Ageing in Australia" and the role of nursing profession on that. ...read more.

http://www.health.gov.au/internet/ministers/publishing.nsf/Content/A91F71800C733544CA257582000DC81F/$File/je025.pdf World's one of the long life expectancy is in Australia. To keep the elderly health Australian government's minister of Ageing Honourable Justine Elliot MP officially announced the "First Physical Activity Recommendations for Older Australians" at the annual health congress on 23 March 2009, in Sydney. It is the first time Australian Government is releasing a physical activity recommendation for elderly. The new recommendation initiates older Australians to be active for at least 30 minutes in a day, so that the life expectancy can be expanded to 81.4 years in women by 2060. This recommendation was developed by National Ageing Research Institute, Melbourne. Mrs. Elliot mentioned that the recommendation aimed to increase the knowledge of older Australians regarding their special activity needs. The new recommendation is expected that, it will reduce the risk of chronic conditions in elderly and for its management such as obesity, CVD, Osteoporosis. The new recommendation is going to be published soon. For mean time what the elderly has to do is clearly informed in the release which is a positive point of the media release. The possible audience for this are general public, health professionals, aged care workers and service providers for aged care. ...read more.