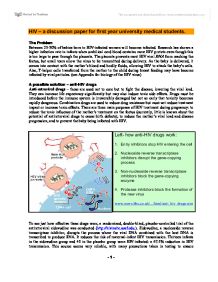 HIV - a discussion paper for first year university medical students. The Problem Between 25-30% of babies born to HIV-infected women will become infected. Research has shown a higher infection rate in infants when umbilical cord blood contains more HIV protein even though this is too large to pass through the placenta. The placenta prevents most HIV viral DNA from reaching the foetus, but small tears allow the virus to be transmitted during delivery. As the baby is delivered, it comes into contact with the mother's blood and bodily fluids, allowing HIV to attack the baby's cells. Also, T-helper cells transferred from the mother to the child during breast feeding may have become infected by viral particles. (see Appendix for biology of the HIV virus) A possible solution - anti-HIV drugs Anti-retroviral drugs - these are used not to cure but to fight the disease, lowering the viral load. They can increase life expectancy significantly but may also induce toxic side effects. Drugs must be introduced before the immune system is irreversibly damaged but not so early that toxicity becomes rapidly dangerous. Combination drugs are used to reduce drug resistance but must not reduce treatment impact or increase toxic effects. There are three main purposes of HIV treatment during pregnancy: to reduce the toxic influence of the mother's treatment on the foetus (currently, little is known about the potential of antiretroviral drugs to cause birth defects); to reduce the mother's viral load and disease progression; and to prevent the baby being infected with HIV. ...read more.

Although the source strongly recommends caesarean delivery, this advice is currently being reconsidered, see the quote below from a WHO report. Women taking specific drug combinations during pregnancy are told that caesarean section is not a significant method in preventing mother to baby HIV transmission. It's rarely advised unless the mother is ill with the virus, or has a detectable viral load. I believe having a caesarean presents an unnecessary risk for the mother. An anaesthetic is used, the woman is more prone to bleeding following delivery and their babies have an increased risk of breathing difficulties. "This (caesarean), however, may not be an appropriate intervention in resource constrained settings, because of limited availability, cost and the risk of complications... use should be limited to cases of absolute necessity." Strategic approaches to prevention of HIV infection in infants, report of WHO meeting March 2002 In contrast, in patients with multi drug-resistant HIV, a specific drug with poor penetration into the genital tract may be advised and the HIV virus here may remain comparatively active. Mothers who need to have this drug treatment require a caesarean section to avoid active viral DNA coming into contact with the baby. Bottle-feeding The World Health Organisation recommends avoidance of all breastfeeding when replacement feeding is affordable, feasible, acceptable, sustainable, and safe. HIV-infected T-helper cells are within breast milk and may otherwise be passed on to the baby. ...read more.

The detail on the biology of HIV is useful for the discussion but not really essential. (12 marks) 2. Applications and implications of the biology encountered Notice that this part is to with applied biology and in this case, ethical, social and economic implications are described in detail with supporting evidence and data (4). Side effects and implications of the treatments are discussed (3) although there could perhaps be more on this. There is also a good discussion of alternative methods such as Caesarean section, nutrition and bottle feeding. (4) (11 marks) 3. Evaluation of source material There is a good range of sources (4), both web based and non web based and quotes are acknowledged throughout the report (4). There is good evaluation of 4 of the sources although perhaps a little more evidence could have been given to support this. For example, 'The article is based on peer-reviewed results that have gone through all the stages of ensuring they are valid, addresses the complications with research progression, and does not present a one-sided or biased viewpoint' - this is excellent but some evidence would have been good. (3) (11 marks) 4. Communicate clearly, concisely and logically The report is very well set out and presented; spelling, punctuation and grammar are fine, there are some excellent 'visuals' and the technical language is very good (2). (4 marks) Overall mark - 38 marks out of 40 (an excellent piece of work) ?? ?? ?? ?? - 1 - ...read more.