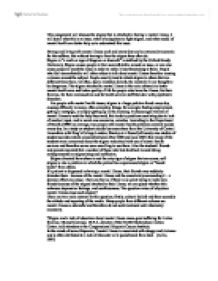 This assignment will discuss the stigma that is attached to having a mental illness, it will detail why this is an issue, what is being done to fight stigma, and what model of mental health can better help us to understand this issue. Having and living with mental illness each and every day can be extremely traumatic for the sufferer, this without having to face the stigma they often do. Stigma is "a mark or sign of disgrace or discredit" as defined by the Oxford Handy Dictionary. Stigma causes people to feel uncomfortable around an issue, or can also cause people to mock the issue in order to make it less threatening to them. People who feel uncomfortable will often refuse to talk about mental illness therefore causing a silence around the subject. People usually tend to attach stigma to others that are different from them. Or often, due to mistaken beliefs, the mentally ill are thought to be dangerous. The stigma attached to mental illness is the main obstacle to better mental health care and better quality of life for people who have the illness, for their families, for their communities and for health service staff that deal with psychiatric disorders. For people with mental health issues, stigma is a huge problem faced every day, causing difficulty in many, often everyday, things, for example finding employment, getting a mortgage, or simply getting up in the morning. ...read more.

We often see news coverage of homelessness, (fairly frequently over Christmas) this is typically attributed to mental health issues, which may not be the cause in many instances. These representations distort the public's outlook and reinforce inaccuracies about mental health issues. It is not just the public who can adopt negative attitudes to the mentally ill, health professionals and GP's can also stigmatise the mentally ill. "The Mental Health Foundation research found that 44% of people who has experienced mental distress said that they had experienced discrimination from GPs. 35% of people surveyed said they had experienced discrimination from health professionals other than GPs." http://www.rethink.org/living_with_mental_illness/everyday_living/stigma_mental_illness/stigma_and_1.html The main reason for these discriminatory behaviours is that some health care professionals are not knowledgeable or experienced in mental illness. Hence they may not actually be able to offer the best advice or care, patients should always be referred to the best available professional and health education may now need to look towards better training, and indeed recruitment, of future mental health workers. However 'Moving People' is planning a �7million advertising campaign to try to change public attitudes to people with mental health issues, in which ten thousand trainee doctors and teachers will be educated in a training programme about mental health issues. ...read more.

The name of this project is 'Rethinking student mental well being' and is funded by the Big Lottery and Comic Relief and its overall aim is to challenge the increasing issue of mental health stigma, raising awareness throughout the student and staff population. In conclusion there are several groups attempting to focus on reducing the stigma attached to mental health issues but generally it is the attitude of the general public that needs to be changed. By and large if the media could focus it's attention, and it's reporting, on more positive aspects of the illnesses, i.e. people's recovery and more modern treatments, then obviously we would see an upturn in the everyday beliefs and attitudes of the public. An increase in the recruitment and better training of mental health personnel would also encourage the delivery of better care, leading to a lessening of negative attitudes, as patients become better placed and able to be part of everyday life. 2087 words Naidoo. J, and Wills. J. 2001. Health Studies: an Introduction. Basingstoke, Palgrave. Stanley, N, Mallon, S, Bell, J Hilton, S and Manthorpe, J. 2004 - 2006. Responses and Prevention in Student Suicide: The RaPSS Study. Papyrus. Sue, D., Sue, D. and Sue, S. 1994. Understanding Abnormal Behaviour. Boston, Houghton Mifflin Company. http://www.cambridge.org/catalogue/catalogue.asp?isbn=0521549434 http://www.rethink.org/living_with_mental_illness/everyday_living/stigma_mental_illness/stigma_and_1.html http://www.mentalhealthcare.org.uk/content/?id=190 http://www.time-to-change.org.uk/news/england-s-biggest-ever-campaign-end-mental-health-stigma-and-discrimination-gets-moving http://www.dh.gov.uk/en/Publicationsandstatistics/Publications/PublicationsPolicyAndGuidance/DH_4006679 Nowak, R (2008) http://www.newscientist.com/article/dn14444-killings-by-the-mentally-ill-reach-new-low.html?DCMP=ILC-hmts&nsref=news9_head_dn14444 Levin, A (2007) http://pn.psychiatryonline.org/cgi/content/full/42/23/8-a http://www.uclan.ac.uk/health/about_health/hpu_rethinking_student_wellbeing.php (All websites accessed on 10th January) ...read more.