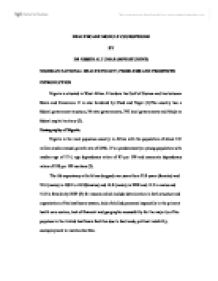 HEALTHCARE MODULE COURSEWORK BY DR NISSER ALI UMAR (MPH STUDENT) NIGERIAN NATIONAL HEALTH POLICY; PROBLEMS AND PROSPECTS INTRODUCTION Nigeria is situated in West Africa. It borders the Gulf of Guinea and lies between Benin and Cameroon. It is also bordered by Chad and Niger (1).The country has a federal government structure, 36 state governments, 750 local governments and Abuja as federal capital territory (2). Demography of Nigeria. Nigeria is the most populous country in Africa with the population of about 124 million and an annual growth rate of 2.8% . It's a predominantly a young population with median age of 17.4, age dependency ration of 93 per 100 and economic dependency ration of 259 per 100 workers (3). The life expectancy at birth has dropped over years from 53.8 years (females) and 52.6 (males) in 1991 to 48.2(females) and 46.8 (males) in 2000 and 41.3 in males and 41.8 in females by 2003 (3) for reasons which include deterioration in both structure and organization of the healthcare system, lack of skilled personnel especially in the primary health care centers, lack of financial and geographic accessibility for the majority of the populace to the limited healthcare facilities due to bad roads, political instability, unemployment to mention but few. ...read more.

For Nigeria both to limit its foreign exchange expenditures and simultaneously to implement massive expansion in primary health care, foreign assistance would probably be needed. Despite advances against many infectious diseases, Nigeria's population continued through the 1980s to be subject to several major diseases, some of which occurred in acute outbreaks causing hundreds or thousands of deaths, while others recurred chronically, causing large-scale infection and debilitation. Among the former were cerebrospinal meningitis, yellow fever, Lassa fever and, most recently, AIDS; the latter included malaria, guinea worm, schistosomiasis (bilharzia), and onchocerciasis (river blindness). Malnutrition and its attendant diseases also continued to be a refractory problem among infants and children in many areas, despite the nation's economic and agricultural advances as such the federal government incorporated the following objectives into nits primary health care system in line with the recommendation of the World Health Organization: * Educating the populace concerning prevailing health problems in the community and the methods of preventing and controlling them * Promotion of food supply and proper nutrition * Maternal and child care, including family planning * Immunizations against the major infectious diseases * Prevention and control of locally endemic and epidemic diseases Nigeria is one of the few countries in the developing countries that have systematically decentralized the delivery of basic services in health and education to locally elected governments and community-based organizations. ...read more.

f) Other problems in implementation of the policy such as Lack of political commitment The implication of the National health policy. The adoption of this national health policy offers the following prospects: a) The various tiers of government have responsibility for the health of the people which shall be fulfilled by the provision of adequate health and social service facilities. b) The citizens shall have the rights and duty to participate individually and collectively in planning and implementation of these services. c) Health care be given higher priority in the allocation of the nation resources that hitherto. d) Access to health care is equitably distributed given preference to those at greater health risk and underserved communities. e) Information on health be disseminated to all individual and communities to enable them have greater responsibility for there health. f) Emphasis be place on preventive and promotive measures, integrated with treatment and rehabilitation in a multi-disciplinary approach. g) All other sectors shall cooperate in the effort to promote the health of the population. Reference 1- http://mbendi.co.za/land/af/ng/p0005.htm 2- http://www.cia.gov/cia/publications/factbook/geos/ni.html 3- WHO Country Cooperation Strategy: Federal Republic of Nigeria 2002- 2007 p7-9 4- http://www3.who.int/whosis/country/indicators.cfm?country=nga 5- http://www.motherlandnigeria.com 6- http://www.unicef.org/Nigeria 7- Textbook of Tropical paediatrics and Child Health by Azubuke et al First Edition P 9- 32 8- Nigerian Health Sector Reform by A.K Ukechuku First Edition Pg 5- 12 9- Nigerian National Health Policy booklet produced by the Federal Ministry of Health 2000. ...read more.