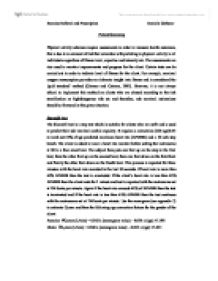 Patient Screening Physical activity schemes require assessments in order to measure health outcomes, this is due to an element of risk that coincides with partaking in physical activity in all individuals regardless of fitness level, expertise and intensity etc. The assessments are also used to monitor improvements and progress for the client. Certain tests can be carried out in order to indicate level of fitness for the client. For example, maximal oxygen consumption provides an elaborate insight into fitness and is considered the 'gold standard' method (Cataneo and Cataneo, 2007). However, it is not always ethical to implement this method on clients who are classed according to the risk stratification as high/dangerous risk etc and therefore, sub maximal estimations should be favoured in this given situation. Siconolfi Test The Siconolfi test is a step test which is suitable for clients who are unfit and is used to predict their sub maximal aerobic capacity. It requires a calculation (220-age)0.65 to work out 65% of age predicted maximum heart rate (APMHR) and a 10 inch step bench. The client is asked to wear a heart rate monitor before setting the metronome at 68 to a four count beat. The subject then puts one foot up on the step to the first beat, then the other foot up on the second beat, then one foot down on the third beat and finally the other foot down on the fourth beat. This process is repeated for three minutes with the heart rate recorded in the last 30 seconds. If heart rate is more than 65% APMHR then the test is concluded. If the client's heart rate is less than 65% APMHR then the client rests for 1 minute and test is repeated with the metronome set at 104 beats per minute. Again if the heart rate exceeds 65% of APMHR then the test is terminated and if the heart rate is less than 65% APMHR then the test continues with the metronome set at 136 beats per minute. ...read more.

and (Carella et al, 1997). More recently, multi frequency bioelectrical impedance analysis was introduced and thought to be more accurate (Thompson et al, 2007) however, recent studies also show that this method also characterises flaws with respect to underestimating fat mass and percentage body fat (Pateyjohns et al, 2006), (Sun et al, 2005), (Neovius et al, 2006), and (Frisard, Greenway and Delany, 2005). Deurenberg, (2006) explains how BIA is based on the principle that an electrical current is sent around the body (Segal et al, 1985) and due to differing density of fat free mass and fat mass, the impedance can be measured from the resistance. Single frequency bioelectrical impedance uses a frequency of 50 kHz and therefore, due to the low frequency, only extracellular impedance is measured as the low current is unable to penetrate the cell membrane. The measured resistance is used to predict total body water (TBW) from the resistance index (RI=height2/measured resistance). The diffusion of water through the lean tissues is complex and many other factors previously mentioned could potentially alter the resistance of the tissue (Foster and Lukaski, 1996). As fat is anhydrous, resistance index can then be used to estimate fat-free mass, using regression equations with more accurate techniques (Houtkooper et al., 1996). An estimate of fat mass can then be calculated by subtraction from the actual weight (Hannan et al, 1994). Fat free mass contains water where as fat mass is anhydrous, therefore fat free mass has a lower resistance and differing conductive and dielectric properties in comparison to fat mass. Due to fat free mass containing water, Minderico et al, (2008) express how error can occur during dehydrated and hyperhydrated states by skewing the results, either to under or over estimating body fat under false pretences. Wright et al, (2008) conveys that BIA can be measured by either using the body stat method (arm-leg) or via the Tanita method (leg-leg). ...read more.