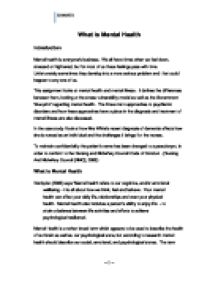 This assignment looks at mental health and mental illness. It defines the differences between them, looking at the stress vulnerability model as well as the Government blue print regarding mental health. In the case study I look at how Mrs

What is Mental Health Introduction Mental health is everyone's business. We all have times when we feel down, stressed or frightened, but for most of us those feelings pass with time. Unfortunately sometimes they develop into a more serious problem and that could happen to any one of us. This assignment looks at mental health and mental illness. It defines the differences between them, looking at the stress vulnerability model as well as the Government 'blue print' regarding mental health. The three main approaches to psychiatric disorders and how these approaches have a place in the diagnosis and treatment of mental illness are also discussed. In the case study I look at how Mrs White's recent diagnosis of dementia affects how she is nursed as an individual and the challenges it brings for the nurses. To maintain confidentiality the patient's name has been changed to a pseudonym, in order to conform to the Nursing and Midwifery Council Code of Conduct. (Nursing And Midwifery Council [NMC], 2008) What is Mental Health Nordqvist (2008) says 'Mental health refers to our cognitive, and/or emotional wellbeing - it is all about how we think, feel and behave. Your mental health can affect your daily life, relationships and even your physical health. Mental health also includes a person's ability to enjoy life - to attain a balance between life activities and efforts to achieve psychological resilience'. Mental Health is a rather broad term which appears to be used to describe the health of our brain as well as our psychological state, but according to research mental health should describe our social, emotional, and psychological states. The term 'Mental Health' is commonly used to describe the opposite particularly in relationship to services. In December 2009 four policy papers and two Government initiatives were launched, laying down the 'blueprint' for their mental health policy in the next ten years, in order to try and tackle stigma and promote recovery for those individuals suffering from a mental illness. ...read more.

Small vessel disease or vascular dementia is the second most common cause of dementia; it usually results from a series of strokes within the brain. Sometimes these are so tiny that no one is aware of any changes but all together they can destroy enough of the brain tissue to affect the person's memory and other intellectual functions. Vascular dementia is also known as 'hardening of the arteries'. There are a number of conditions that can cause or increase damage to the vascular system. These include hypertension, heart problems, high cholesterol and diabetes. People with dementia may also have other illnesses. (The 36 hour day, 2006) This is certainly the case for Mrs White who has other medical conditions the can cause or increase the damage to the vascular system. Dementia can also make the affected person vulnerable to other health problems. The symptoms of dementia tend to appear gradually and Mrs White is displaying the common symptoms of vascular dementia which includes periods of acute confusion and physical weakness. Further into her stay on the unit Mrs White became disoriented , sometimes she would refuse to go to bed until her husband joined her, she would have loud, long conversations with 'people' who were not there. As time progressed Mrs White became more agitated, aggressive and her speech was unclear at times. During her stay on Dedham Ward Mrs White underwent a complete medical and neurological examination. This included a detailed history, which was taken from Mrs White's husband and other family members, about how she had changed, what symptoms she had had and the order in which they had developed, as well as information about her other medical conditions. She underwent a detailed physical and neurological examination to reveal any changes in the functioning of the nerve cells of the brain or spine. The doctor also performed a mental status examination. This is an important diagnostic tool used to obtain information to make an accurate diagnosis and involves a direct observation of the individual's current state of mind. ...read more.

Conclusion Mental health is something that affects every member of the population, young and old alike, yet mental illness is often misunderstood. Mental illness is thought of as diseases that are 'just in the head'. If this is true then surely the Government would not have made mental health an important part of their policy to raise awareness and attempt to change attitudes towards mental health. Although research has shown that healthy living, which is a combination of many things, including good nutrition, regular exercise and a positive attitude, taking care of your body and feeling pride in your accomplishments can improve both your physical and mental health. Research also suggests that an individual's biological, psychological and social elements can play an important part in their mental health. These are important approaches that need to be taken into consideration when a person displays symptoms of a mental illness, for example an adolescent who is experiencing mental health difficulties maybe struggling with a social situation perhaps within their family or at school. Growing old is a natural process that produces a range of reactions in different people. The most common mental health problems in older people are depression and dementia. But there is a widespread belief that these problems are a natural part of the ageing process, this is not the case as only 20% of people over 85, and 5% over 65, have dementia and 10-15% of people over 65 have depression. It is important to remember that the majority of older people remain in good mental health. (Steward & Golding, 2009) Unfortunately Mrs White falls into that 5% and her diagnosis of dementia was emotionally difficult for her family involved especially her husband. People with dementia find it more difficult than others to communicate their needs and wishes, and they are the most vulnerable to inappropriate care, therefore it is important to be a skilled nurse who can combine the best of their nursing knowledge with tender loving care. ...read more.