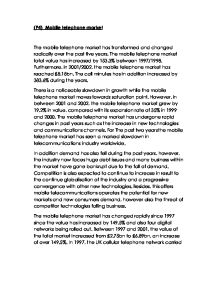 In 2007 faster technology has started to grow, high speed downlink packet access (HSDPA) which facilitated greater moves into content provision for mobile. A variety of different network operators for example Three, Vodafone and orange, made deals with television firms such as BBC, to expand programme content. In addition Key Note forecasts have predicted that revenue from non-voice services will increase proportionately to total revenue over the next five years (2008 to 2012), with market share growing from 21.2% in 2008 to 31.2% in 2012. The UK mobile telecommunications market was worth �13.6bn in the year ending March 2006, having increased in value by 7.7% on the previous year, although it remains the most active telecommunication market in the United Kingdom. Furthermore, the yearly sales growth slowed considerably compared with previous years, reflecting maturity and price restrictions on call termination rates. A growing share of the UK mobile market is now in overseas hands, with 4 of the big five mobile operators being foreign owned and these firms control approximately 73% of mobile retail revenues. ...read more.

Phone retailers are facing a tough times since the sales is decreasing. Below is a table which basically proves that sales for the mobile phone market are decreasing from the period of 1999 and 2005:- Global sales growth rate 1999 67% 2000 43% 2001 -5% 2002 9% 2003 21% 2004 30% 2005 8% Smartphones are benefiting from brisker than expected growth, according to a new report from Gartner. The company's lately released "mobile terminals" market study projects that shipments of mobile phones in general will surpass 1 billion units in 2009, and that "smartphones" will reach the 200 million mark one year earlier, in 2008. Carphone warehouse would actually find it uncomplicated to convert its stores very quickly and expensively to essentially serve another market. The layout of the business for Carphone Warehouse is quite effortless and simple, for this reason the organisation would perhaps find it simple to move stock in and out of stores to convert its business and serve another market. Carphone warehouse only has phones on the wall as a display and would be a trouble free for the company to move its stocks. ...read more.