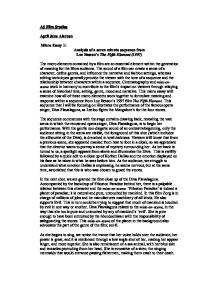 AS Film Studies April Jane Alarcon Micro Essay 1: Analysis of a seven minute sequence from Luc Besson's The Fifth Element (1997) The micro elements contained by a film are an essential element within the generation of meaning for the films audience. The sound of a film can create a sense of a character, define genres, and influence the narrative and fashion settings, whereas editing techniques generally provide the viewer with the tone of a sequence and the relationship between characters within a sequence. Cinematography and mise-en-scene work in harmony to contribute to the film's impact on viewers through relaying a sense of historical time, setting, genre, mood and narrative. This micro essay will examine how all of these micro elements work together to formulate meaning and response within a sequence from Luc Besson's 1997 film The Fifth Element. This sequence that I will be focusing on illustrates the performance of the famous opera singer, Diva Plavalaguna, as Leeloo fights the Mangalore's for the four stones. The sequence commences with the stage curtains drawing back, revealing the vast arena in which the renowned opera singer, Diva Plavalaguna, is to begin her performance. With the gentle non-diegetic sound of an orchestra beginning, only the audience sitting in the arena are visible, the foreground of this shot (which includes the silhouette of the Diva), is drenched in total darkness. ...read more.

The camera tracks around the Diva, demonstrating the large audience she entertains, with the Diva being in the centre of the frame in most of the edits, we are reminded that the director is hoping for our attention to be completely focused on the Diva's and her performance. The subsequent edit illustrates the captain of the ship being informed that another ship requests docking for 'repairs'. We assume that even though the security is expected to be exceptionally tight, the captain is distracted by the performance he watches on a screen. We know that the director would not have exposed this shot unless it had any relevance to the scene and this is confirmed when in the next shot we see Zorg is the one being granted permission to board the spacecraft for one hour. Any reservations that the audience may have had about danger being ahead are reinforced, as we know that any place that Zorg is, danger is not far behind. As Zorg boards the spacecraft quoting 'That's more than I need' (in relation to being granted one hour for repairs), the mood of Diva's song changes slightly, becoming more intense. Another cut-away shot from the Diva, brings us to her room where her guards await. ...read more.

Bravo!', Zorg enters the room and compliments Leeloo with 'Bravo! Bravo, my compliments little lady..'. Subsequent to Leeloo tossing the chest to Zorg and hiding in the air vent, Zorg begins to shoot, and as he does, we observe as the Mangalore's also begin to shoot and take over the spaceship. The non-diegetic soundtrack recommences, this time it is dramatic with ominous chords accompanied by the diegetic sound of gunshots. The bridge over of the non-diegetic sound not only increases the tension, but again reminds us that the two scenes are connected. The sequence ends with Leeloo trapped in the air vent. Zorg fires his gun and shoots her. At this precise moment, the Diva Plavalaguna is shot aswell, and she falls to the floor of the stage. The non-diegetic music which climaxes this sequence is powerful and intimidating and we know that much danger is still ahead. Much of the diegetic and non-diegetic sound in this sequence 'narrated' the scene. It is clear that in this sequence, editing techniques and sound are essential and are intimately linked. They function to show the viewer the close relation between the fifth element and the four elements inside the Diva. Cinematography works to express who is the focus of this sequence, although mise-en-scene doesn't play a huge part in contributing to the narrative. ...read more.