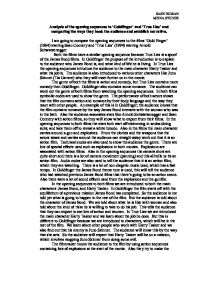 Analysis of the opening sequences to 'Goldfinger' and 'True Lies' and comparing the ways they hook the audience and establish narrative.

From the clothes and the weapons that the actors wears and carries around the audience can straight away work out that it is an action film. Technical codes are also used to show the audience the genre. There are lots of special effects used such as explosions in both movies. Explosions are associated with action films. Also in the opening sequences the camera shots are quite short and there is a lot of camera movement (panning) and this all tells us its an action film. Audio codes are also used to tell the audience that it is an action film, which they are watching. There is a lot of non-diegetic music used, which has a fast tempo. In Goldfinger the James Bond theme tune is used, this will tell the audience who had watched previous James Bond films that there's going to be an action scene. ...read more.

We learn about other people who work with Harry Tasker and we also find out that his enemy is Juno Skinner. The audience will know this by the way that she acts. So the audience will expect that Harry Tasker will be on a mission, which involves stopping Juno Skinner from doing some evil. The filmmaker hooks the audience to the film by using action sequences containing lots of explosions at the start of the movie. Also they try to make the audience think about what is going to happen in the rest of the movie, this will make them want to watch it to find out if they were right. Films are promoted using their opening sequences. The use of the stars is used to promote the film. Arnold Schwarzenegger and Sean Connery; are known to the public as starring in mainly action films. So from seeing these stars in the films the audience will know what to expect and so they will decide if they like the film or not. SAJIN INDRAN MEDIA STUDIES ...read more.