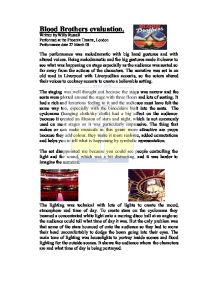 Blood Brothers evaluation. Written by Willy Russell Performed at the Phoenix Theatre, London Performance date 27 March 03 The performance was melodramatic with big hand gestures and with altered voices. Being melodramatic and the big gestures made it clearer to see what was happening on stage especially as the audience was seated so far away from the actions of the characters. The narrative was set in an old road in Liverpool with Liverpudlian accents, so the actors altered their voices to cockney accents to create a believable setting. The staging was well thought out because the stage was narrow and the seats were plotted around the stage with three floors and lots of seating. ...read more.

The lighting was technical with lots of lights to create the mood, atmosphere and time of day. To create stars on the cyclorama they beamed a concentrated white light onto a moving disco ball at an angle so the audience could tell what time of day it was. But the only problem was that some of the stars bounced of onto the audience so they had to move their head uncomfortably to dodge the beam going into their eyes. The main tone of lighting was houselights to portray inside scenes and flood lighting for the outside scenes. It shows the audience where the characters are and what time of day is being portrayed. ...read more.

At one point a young boy was hiding behind a bed sheet on a washing line, when a certain part of the sheet started to rise, insinuating that the boy was sexually aroused by a young girl in his presence. This was a particularly hilarious scene and the audience roared with hysterical laughter. Towards the end of the play the two main characters, Mickie and Eddie, stood facing each other with Mickie pointing a gun towards Eddie. This whilst their mother Ms Johnston was trying to persuade Mickie to put down the weapon. Then BANG!! BANG!! - and Eddie fell to the ground closely followed by Mickie. The audience jumped with shock at this point. By Luke Kyriakides ...read more.

The use of images and photographs in this essay greatly enhance to finished product, but unfortunately the reader relies on them too much to imagine properly how the performance went. There is a clear understanding of the areas of theatre ...

The use of images and photographs in this essay greatly enhance to finished product, but unfortunately the reader relies on them too much to imagine properly how the performance went. There is a clear understanding of the areas of theatre that need attention - acting, staging, sound and lighting - but the execution of the evaluation is unclear at times and the candidate often makes simple errors, like mixing Liverpudlian accents with Cockney ones. Elsewhere, the structure is fairly good and work well for the candidate, as they dedicate a paragraph to each theatrical feature however, the introductory paragraph is slightly askew in it's intentions, and tries to cover too much random detail without appropriately broadly approaching the task set, such as saying in long-hand the name of the production, the playhouse, the date and the company which performed the play. Also, the concluding paragraph doesn't appear to exist, and this is a fundamental error because candidates are marked on their ability to structure a cohesive essay. Think of introductions and conclusions as sort of 'bookends' and you'll see why they're so important without them the whole thing feels open, and slightly slapdash because there is no real reason given for the essay without an appropriate introduction and conclusion.

The Level of Analysis shown here is fair. The candidate may given their information a little unclearly, but their personal response is evident. They might be better off considering the benefits of some of the aspect of the performance they weren't impressed with, such as how the set may have been a composite set, in which case the revealing of the inner workings of the set and the 'puppeteers' in the flyers, wings and backstage are all meant to be visible, and so this is not so much an issue for the excellence of performance. However, as there is no indication of this set design in use, the candidate is not at fault. I would, regardless, like to see a more balanced criticism of some of the performance not-so-impressive aspects.

The Quality of Written Communication is very good. The candidate, from a Theatre Studies perspective accurately applies important theatrical terminology, although in some places the application is a little awry, making the essay feel a little clunky due to perhaps an incorrect understanding of some terms. From an English perspective, the essay is fine, with a good adherence to the rules of Standard English (grammar, spelling and punctuation).