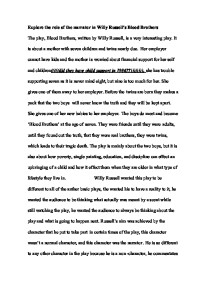 Explore the role of the narrator in w***y Russell's Blood Brothers The play, Blood Brothers, written by w***y Russell, is a very interesting play. It is about a mother with seven children and twins nearly due. Her employer cannot have kids and the mother is worried about financial support for her self and children(((((did they have child support in 1986??)))))))), she has trouble supporting seven as it is never mind eight, but nine is too much for her. She gives one of them away to her employer. Before the twins are born they makes a pack that the two boys will never know the truth and they will be kept apart. She gives one of her new babies to her employer. The boys do meet and become 'Blood Brothers' at the age of seven. They were friends until they were adults, until they found out the truth, that they were real brothers, they were twins, which leads to their tragic death. The play is mainly about the two boys, but it is also about how poverty, single painting, education, and discipline can effect an upbringing of a child and how it effect them when they are older in what type of lifestyle they live in. ...read more.

He opens the play "....bring on the mother let the story begin" He closes the play and links the scenes. "Seven years later........ Several years later......Two years later" The narrator does all of these thing so that the audience knows what is happening in the play, when the actual story begins, ends if any significant time has passed in the play, because if a member of the audience doesn't know if the play is in action or the narrator is speaking of any time passed in the play then that person will have a very hard time understanding what the play is about. When the narrator creates a mood for a peculiar scene, he is basically giving the audience a mood for that scene. The quote that I used is telling the audience that someone has done something terrible and the devils after him. This is automatically giving the audience the feeling that some thing is going to happen to that person for his bad doing. The narrator also used psychology to put the audience on a peculiar mood for the scene coming. ...read more.

Not only does the narrator speak to audience, but he speaks in a poetic form, the speeches have a strong sense of rhythm. "So did you ever here the tale of the Johnston twins As like each other as two new pins, How one was kept how one was giving away They were born and they died on the self same day." When the audience hears the beat to the speech they pay more attention to it and become more active with the play. Some times when the narrator speaks to the audience, he is commenting on a character. "Then bring her on, come let see The author of such cruelty And judge for ourselves this terrible sin Bring on the mother and let the story begin" The narrator again is speaking in a poetic form. When he has said this about a character he automatically sets the next scene and also again sets the audience in a peculiar mood. The mood the narrator wants the audience to be in is a judgmental one, when in the quote; he is inviting the audience to judge the character. When inviting the audience, he is making the audience active in the play. ...read more.