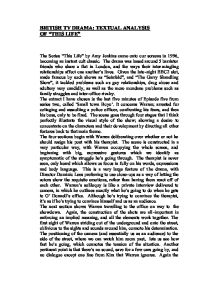 BRITISH TV DRAMA: TEXTUAL ANALYSIS OF "THIS LIFE" The Series "This Life" by Amy Jenkins came onto our screens in 1996, becoming an instant cult classic. The drama was based around 5 barrister friends who share a flat in London, and the ways their intermingling relationships affect one another's lives. Given the late-night BBC2 slot, made famous by such shows as "Seinfeld", and "The Garry Shandling Show", it tackled problems such as gay relationships, drug abuse and adultery very candidly, as well as the more mundane problems such as family struggles and inter-office rivalry. The extract I have chosen is the last five minutes of Episode five from series two, called 'Small town Boyo'. It concerns Warren; arrested for cottaging and assaulting a police officer, confronting his fears, and then his boss, only to be fired. The scene goes through four stages that I think perfectly illustrate the visual style of the show; showing a desire to concentrate on the characters and their development by directing all other features back to that main theme. ...read more.

Again the physical reactions by the actors are all that's needed to convey the purpose with which Warren moves. The pause for Warren to pull at his collar before walking gun-barrel straight into O'Donnell's office is a good narrative tool, readying the audience for the confrontation ahead. The showdown itself uses many elements juxtaposed to try and emphasise the two sides of the argument. Like previous scenes, each character is shown in close up; with the focus switching between them at alternate points. Again this leaves the audience as mediator, gauging the two reactions. If we were to study the mise-en-scene of the two shots, we'd see O'Donnell is clearly the dominant figure. His head is in the top of the shot, looking down at Warren from a seat of authority, whereas Warren is looking up - hopeful, desperate. Behind O'Donnell is a glistening bookcase, implying intelligence, reason; behind Warren is a blank, dark blue wall. We can see how the emotions of each character change over the course of the scene, with Warren's optimism and determination melted down to vulnerability and anger, while O'Donnell goes from steely professionalism to pity. ...read more.

But while I recognise these things easily, they are still understated enough to be enjoyed on a more superficial level by anyone else. Despite the popularity of the first series, the BBC wisely decided to keep the second series on BBC2 at 11.40pm, as perfect post-pub viewing. They were aware of the movements of their target audience, illustrated by the amount of trips to the pub made by the main protagonists. The fact that there were only two series is a shame, but it shows also the creators were aware of the limited shelf life of mot TV programmes, especially those aimed at young people. Some would say that this is a knock on effect of the dumbing down of television, and computer games creating a 3-minute culture of short attention spans. I think to some extent that's true, but it could be equally attributed to the speed with which trends and fashion change amongst young people. It's hard to consistently cater for a wide audience of people who are still trying to formulate their own opinions and identity, and those producers who acknowledge this are those that will prosper. ...read more.