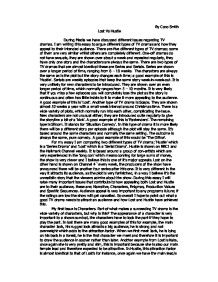 For my essay I am comparing two different types of TV drama; 'Hustle' which is a 'Series Drama' and 'Lost' which is a 'Serial Drama'. Hustle is shown on BBC1 and the Hallmark Channel weekly

By Coco Smith Lost Vs Hustle During Media we have discussed different issues regarding TV dramas. I am writing this essay to argue different types of TV dramas and how they appeal to their intended audience. There are five different types of TV dramas; some of them are very similar whilst others are completely different. One-off dramas do not have sequals, they are shown over about a week and repeated regularly, they have only one story and the characters are always the same. There are two types of TV dramas that are almost identical these are Series and Serials. Series are shown over a longer period of time, ranging from 8 - 10 weeks. The characters are always the same as is the plot but the story changes each time; a good example of this is 'Hustle'. Serials are weekly episodes that keep the same story week-in-week-out. It is very unlikely for new characters to be introduced. They are shown over an even longer period of time, which normally ranges from 5 - 10 months. It is very likely that if you miss a few episodes you will completely lose the plot as the story is continuous and often has little twists to it to make it more appealing to the audience. A good example of this is 'Lost'. Another type of TV drama is Soaps. They are shown almost 52 weeks a year with a small week interval around Christmas time. There is a wide variety of plots, which normally run into each other, complicating the issue. New characters are not unusual either; they are introduced quite regularly to give the storyline a bit of a 'kick'. A good example of this is 'Eastenders'. The remaining type is Sitcom. It stands for 'Situation Comedy'. In this type of drama it is more likely there will be a different story per episode although the plot will stay the same. ...read more.

Knowing a character is a very important factor of audience appeal, it makes the audience feel more involved and also makes them aware of what might happen to that character. Another major issue focusing on audience appeal is the Narrative (storyline) these differ quite massively from Lost to Hustle but still both offer the action and adventure that their audiences crave. Lost for example is based on the novel 'Lord of the Flies' by William Golding, where a group of people are stranded on an island and are attempting to get off with each others help, but along the way are faced with conflicts which they inflict themselves. Along with that larger main story there are many smaller ones, which sometimes interfere with each other. The Korean family for instance, they don't speak English and so the audience as well as the cast are rather apprehensious about them. Nobody knows who they are and so the storyline also adds to the enigmas. Hustle on the other hand is very different; the main story is about a group of con artists who con business people out of large sums of money, but inside that main story there are quite a few smaller ones, which are very discreet. For instance, in the first episode Danny mentions that Stacey still likes Micky. Straight away this draws the audience in. Miniature stories like these also have a great effect on the program and its success and therefore add to the audience appeal as well. Another issue I find very important is Enigmas; these contribute to the program in many different ways and are a large help in audience appeal, they almost keep the program alive in a way. I believe that without substantial enigmas a program would be out of business within a few episodes. They are also a good way of bringing the program back to life if the producers feel it is becoming increasingly dull. ...read more.

I have already explained part of why this appeals to its audience but it also draws the audience in and has them asking themselves rhetorical questions such as; 'How did he get there?' and 'What happened to him?' Hustle is quite different, once again I have already mentioned the first sequence that appeals to me is the opening, this time it is animated, there is lots of colour and the music is really catchy and so I find it very appealing. Another sequence that appeals to me is the scene where Danny's mobile phone rings and he doesn't know which one it is, he looks at them all and we see different stickers on each one with different jobs. It is appealing to its audience because it is highly amusing and also very establishing to the program as it shows us what kind of a person Danny is. All in all Specific Sequences are very appealing to the audience and therefore help the program succeed. To conclude, audience appeal is probably the most important factor to a succeeding program no matter what genre and where Hustle and Lost are concerned they are both brilliant examples of this. It can be broken down into different parts all of which are just as important as each other. We need a good narrative to entice our audience and keep them interested, we need intriguing characters that we can learn from and respect, enigmas that make the program exciting and keep the audience watching, a high production value to make the audience feel like there was no expense spared and we need specific sequences which make our audience ask questions and keep them involved. The point of this essay was to compare Lost to Hustle and I hope from what I've written you can get a clear picture of their differences and similarities. All in all, Lost and Hustle are two very different programs with some very similar methods of attracting the audience it pines for. ...read more.