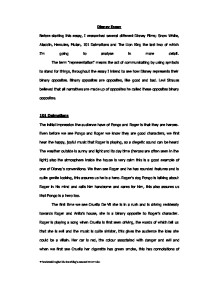 Disney Essay Before starting this essay, I researched several different Disney Films; Snow White, Aladdin, Hercules, Mulan, 101 Dalmatians and The Lion King the last two of which I'm going to analyse in more detail. The term "representation" means the act of communicating by using symbols to stand for things, throughout the essay I intend to see how Disney represents their binary opposites. Binary opposites are opposites, like good and bad. Levi Strauss believed that all narratives are made up of opposites he called these opposites binary opposites. 101 Dalmatians The initial impression the audience have of Pongo and Roger is that they are heroes. Even before we see Pongo and Roger we know they are good characters, we first hear the happy, joyful music that Roger is playing, so a diegetic sound can be heard The weather outside is sunny and light and its day time (heroes are often seen in the light) also the atmosphere inside the house is very calm this is a good example of one of Disney's conventions. We then see Roger and he has rounded features and is quite gentle looking, this assures us he is a hero. ...read more.

Roger and Anita's Home Cruella's Home Relaxed atmosphere Tense atmosphere Bland colours, cream and beige Bright colours, red and black Shown in daylight Shown in the dark The Lion King Before the establishing shot, non-diegetic sound has already started. The music gives the impression that the animated film is set in Africa, setting a happy mood, the words of the song are about the reinforcement of life. The establishing shot backs up the idea of the film being set in Africa, the sun is rising in the distance, so it's a dawn of a new day, therefore it's a metaphor for life. We then see the animals and they are all heading in the same direction together, they are creating a sense of expectation as they all look towards the sky. All these characters are heroes, they are seen in daylight, there is a happy atmosphere and they are all helping each other. The rise to Mufasa and Simba's appearance sets an atmosphere of happiness and anticipation; this gives the audience a clue that these two are heroes. The first shot of Mufasa is a low angle shot, this creates the sense of power it has connotations of power and importance. ...read more.

Conclusion Disney always represents their heroes and villains in similar ways, this is known as a convention. Here are a few ways Disney represents them Heroes Villains Often American accents Often very strong English accents Soft, rounded features Pointed, sharp features Seen in daylight Seen in the dark, or shadows Lots of friends No real friends In Mulan when the audience see the villains, an aggressive non-diegetic sound is heard but when the audience see the heroes a happy non-diegetic sound is heard. In Aladdin the villain, Jafar is very sarcastic and the hero Aladdin is honest. These are all binary opposites. Binary opposites appear in all Disney Films, they are used because it is made obvious to the audience who the villains and heroes are. Disney also uses the Todorov narrative formulae the use of which makes it obvious to the audience what the resolution of the film will be. The Todorov formula is:- This is the Todorov narrative formula for the Lion King. If the audience can guess correctly the ending of the film it makes them feel good about themselves, it gives them gratification. This then makes them want to see a film similar to that again a successful formula that Disney uses time and time again. ?? ?? ?? ?? C:\Documents and Settings\Kayleigh Ryan\My Documents\Kayleigh\Media Studies\Disney Essay.doc ...read more.