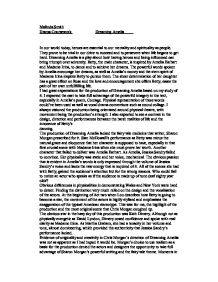 Malinda Smith Drama Coursework Dreaming Amelia In our world today, heroes are essential to our mentality and spirituality as people. They prove to be vital in our drive to succeed and to persevere when life begans to get hard. Dreaming Amelia is a play about how having heroes and being influenced can bring triumph over adversity. Betty, the main character, is inspired by Amelia Earhart and Madame Irina, to dance and to achieve her dreams. The powerful words spoken by Amelia encourage her dreams, as well as Amelia's money and the stern spirit of Madame Irina inspires Betty to pursue them. The sheer determination of her daughter has a great effect on Rose and the love and encouragement she offers Betty, eases the pain of her own unfullfilling life. I had great expectations for the production of Dreaming Amelia based on my study of it. I expected the cast to take full advantage of the powerful imagery in the text, especially in Amelia's poem, Courage. ...read more.

This was for me, the highlight of the production and the most original scene that Chris Morgan coughed up. The obvious star in the hazy sky of this production was Kath Dimery. Although not as physically energetic as David Lyndon, Dimery oozed confidence and spoke with real clarity as Madame Irina. As Martha Graham, she had a tenacity in her volume and tone, almost domineering, which provided the authenticity that Jessica Sandry's performance lacked. Evidence of originality and creativity in Chris Morgan's direction of Dreaming Amelia was not as apparent as I had hoped it would be. Morgan's choice to use realism as a basis for the production denied the actors and designers the opportunity to take full advantage of Sharon Morgan's powerful writing and the fairy tale theme. Moments in which good use of dramatical ability could've been used, didn't quench the creative thirst. In a confrontation between Danny, Rose and Betty over the latter's dancing lessons, there was a disturbing effect that remained latent. ...read more.

The emptiness of the stage powerful in conveying both the emptiness of Rose and Betty as people and their basic lifestyles. Amelia Earhart is one of many examples in history, of a person who had the courage to help herself and the world, to realise her potential. Faced with the oppression of a male dominated society, she is inspirational and taught people that having courage can release us from a bad existence. Dreaming Amelia is a story born out of Sharon Morgan's heart and her own painful, personal experiences, as well as the inspiring life of Amelia Earhart. It's a rich, organic play with an essence that can only be obtained when something is created from the soul and not from the mind. The ideas of Sharon Morgan have made a fable which is motivating in the way that every story should be. I found reading and analysing the play more compelling than watching Hijinx's production. he production failed to discover the true meaning of the play and capture Amelia Earhart's spirit which I found more obtainable in the text. ...read more.