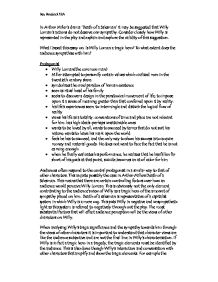 In Arthur Miller's drama 'Death of a Salesman' it may be suggested that Willy Loman's actions do not deserve our sympathy. Consider closely how Willy is represented in the play and explain and explore the validity of this suggestion.

In Arthur Miller's drama 'Death of a Salesman' it may be suggested that Willy Loman's actions do not deserve our sympathy. Consider closely how Willy is represented in the play and explain and explore the validity of this suggestion. What I based this essay on: Is Willy Loman a tragic hero? To what extent does the audience sympathise with him? Protagonist * Willy Loman(the common man) * Miller attempted to personify certain values which civilized men in the twentieth century share. * symbolizes the cruel paradox of human existence * seen as ritual head of his family * seeks to discover a design in the paradoxical movement of life; to impose upon it a sense of meaning greater than that conferred upon it by reality. * his life's experiences seem to intermingle and disturb the logical flow of reality * views his life as a totality. conventions of time and place are not relevant for him. has high ideals-perhaps unattainable ones * wants to be loved by all; wants to succeed by terms that do not suit his nature; wants to leave his mark upon the world. ...read more.

A specific example of this is how she stands by him while his flaw of self deception causes him to suffer and he visibly deteriorates, Linda standing loyally next to him also suffers as a result of this: Biff: Your Hair...Your hair has got so grey.Linda: Oh it's been grey since you were at high school. It is clear from her sons perception that Linda is physically deteriorating, which the audience can later presume is due to her knowing that Willy is suicidal, yet she stands by him and she loyally makes excuses for her own deterioration so not to distract any attention from her sons so they can focus on their father. The effect that Linda has on the audience's perception of Willy as a hero is substantial. She also causes the audience to sympathise with him as they empathise with her. She is seen as a loyal worthy fine lady, so consequently she is respected by the audience, as well as any decision that she makes. So her decisions to love, respect and defend Willy Loman in his time of need is effects the audience. They start to see Willy as a man in need and this causes them to sympathise with him. ...read more.

However Biffs view of Willy creates another perspective Willy's characterisation one that the audience does not see as a noble tragic hero and subsequently does not give Willy any sympathy. Biff understands that his father is in a state of denial and that it is his own fault: "He had all the wrong dreams. All, all wrong." Biff believes his father never really knew who he was, and his suffering was a result of this. This in effect does not portray Willy as a tragic hero as his suffering was his own fault and he was not battling against anything but himself, in Biffs' view. However it could be argued that Willy was fighting against a capitalist system that demanded he worked for material possessions. So in conclusion Willy does in fact receive sympathy from the audience as his deterioration and the loss of his son's admiration and respect, which he held so dearly, causes the audience to emphasise with him. However as Willy's downfall is self inflicted and could be seen as a selfish act, weather he is seen as a tragic hero is debateable, and is even inconsistent with other characters, so it is a largely subjective matter with fair arguments on both sides. Ben Ruddock 12A ...read more.