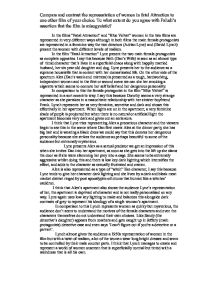 In the films "Fatal Attraction" and "Blue Velvet" women in the two films are represented in very different ways although in both films the main female protagonists are represented in a feminine way the two directors (Adrian Lyne) and (David Lynch) present the women with different levels of realism. In the film "Fatal Attraction" Lyne present the two main female protagonists as complete opposites. I say this because Beth (Dan's Wife) is seen as an almost type of timid character that's lives in a superficial chaos along with happily married husband, her six year old daughter and dog. Lyne presents her to the audience as a supreme housewife that is content with her domesticated life. On the other side of the spectrum Alex (Dan's week-end mistress) is presented as a tough, hardworking, independent women and in the first or second scene we can she her smoking a cigarette which seems to connote her self belief and her dangerous personality. In comparison to this the female protagonist in the film "Blue Velvet" is represented in a sort eccentric way. ...read more.

In comparison to this Lynch represents women as quirky but mysterious, the audience don't seem to understand the motives of the female characters and even the characters themselves do not understand their own choices. Like Sandy (the detective's daughter) appears from nowhere and gets caught up in Jeffery (main protagonists) detective case and even says 'I can't figure out if you're a detective or a pervert'. Lynch almost gives the audience a 1950s representation of women in the film but with a twist of realism, a lot of the women wear long bright dresses and seem to be controlled by their male counter parts. I think that Lynch manages to create and represent a world of women onscreen that is superficially normal but tinted with a weirdness that is all his own. In "Fatal Attraction" Lyne gives us the impression that "housewives" such as Beth are seen as not much as a threat as single working women are. He in a way represents Beth as almost a perfect mother and wife that is making a really good example to other women. ...read more.

He represents career women as a sexual predators seeking married men and indeed trying to ruin their lives when they cannot get them. I think he tries to show that working women are abnormal and perhaps that they all live psychotic lives. Faludi's assertion is again right because he never gets the audience to identify with Alex, he shows her as a witch like character and even though she does things like slitting her wrists I think that the audience are never able to sympathize her grief instead they label her as stupid. Again when Alex is killed the audience seem to forget that she was actually pregnant and are actually celebrating her death rather than pitying her. In conclusion I think that Lyne is misogynistic as he dominant ideology about career women is that they extremely dangerous and also that indeed the only good single women is a dead one. Compare and contrast the representation of women in fatal Attraction to one other film of your choice. To what extent do you agree with Faludi's assertion that the film is misogynistic? ...read more.