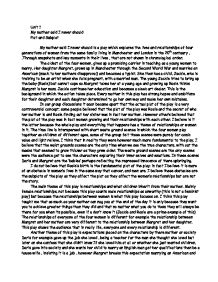 Unit 1 My mother said I never should Plot and Subplot My mother said I never should is a play which explores the lives and relationships of four generations of women from the same family living in Manchester and London in the 20th centaury , .Through snapshots and key moments in their lives , that are not shown in chronological order. The oldest of the four women, gives up a promising carrier in teaching as a young women to marry. Her daughter Margret, grows up in Manchester through the Second World War and marries an American (much to her mothers disapproval) and becomes a typist. She then has a child, Jackie, who is training to be an artist when she falls pregnant, with a married man. The young Jackie tries to bring up the baby (Rosie) but cannot cope so Margret takes her at a young age and growing up Rosie thinks Margret is her mum. Jackie continues her education and becomes a sleek art dealer. This is the background in which the action takes place. Every mother in this play has strong hopes and ambitions for their daughter and each daughter determined to go her own way and make her own mistakes. In our group discussions it soon became apart that the actual plot of the play is a very controversial concept; some people believed that the plot of the play was Rosie and the secret of who her mother is and Rosie finding out her sister was in fact her mother. ...read more.

This play shows the audience that in really life, everyone and every relationship is different. Another theme of this play is expectations placed on the characters by there mother or society Doris for example gave up the job she loved , being a teacher for the man she thought she loved but later on she confess that she didn't know If she loved him at all or whether she just wanted children, Doris gave into society and she wants her child to marry an English man get her qualifications then be a house wife , insisting it is a job , however Margret breaks this expectation marrying an American and getting a job typing , she did also have Jackie though. Margret had ambitions for Jackie to have a really good art job; however when she had Rosie although kept up with her mother's ambitions of the job. Rosie is the only character who seems to have no expectations placed upon her; she also seems to be the happiest and freest. Another theme of the play is secrets, or rather hidden emotions .Throughout this play I couldn't help feel that if all the characters told the truth and how they felt, they would be a lot happier. Margret never tells Rosie and Jackie that her husband has left her, so Jackie takes Rosie away leaving Margret. Margret also lies about her illness which means her daughter is not with her when she dies .Jackie lies to Rosie about ...read more.

The audience are relatively unbiased so they can watch the argument and use it to fully understand the relationships between the characters. The audience watch the characters go through problems that they may never see even their closest friends go through for example when Jackie has to give up her baby. This enables the audience to understand the dynamics of the relationships and expectations placed upon the characters perfectly. This is how Keatley uses action to convey her themes. I feel there are three key action moments of this play. The first is when Margret finds out that her child (Jackie) has had sex and they argue. The second is when Margret confesses to her mother (Doris) that her husband has left her. And the third is when Rosie confronts Jackie about the fact that she knows she's her mother. I feel that the key action moments of a play are personal to everyone that study's it ,particularly a play like this as reactions to the play in our drama group was very individual and interestingly I feel that the relationships the pupils have with the women in their family affected the way the perceived the play. I chose these as my key action moments because I felt these were the points in the play were the characters took of the mask that the had up and showed their inner emotions like in the waste ground scenes. This enabled the audience to really understand the characters and their relationships with their mothers, which is what I feel the message of the play is about. ...read more.