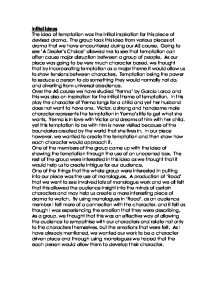 Our aim was to create a character driven piece of drama, lasting approximately 25 minutes, using realistic situations with moments of abstraction to create a situation controlled by temptation

Initial ideas The idea of temptation was the initial inspiration for this piece of devised drama. The group took this idea from various pieces of drama that we have encountered during our AS course. Going to see 'A Dealer's Choice' allowed me to see that temptation can often cause major disruption between a group of people. As our piece was going to be very much character based, we thought that by incorporating temptation as a major theme it would allow us to show tensions between characters. Temptation being the power to seduce a person to do something they would normally not do, and diverting from universal obedience. Over the AS course we have studied 'Yerma' by Garcia Lorca and this was also an inspiration for the initial theme of temptation. In this play the character of Yerma longs for a child and yet her husband does not want to have one. Victor, a strong and handsome male character represents the temptation in Yerma's life to get what she wants. Yerma is in love with Victor and dreams of him with her child, yet this temptation to be with him is never visited because of the boundaries created by the world that she lives in. In our piece however, we wanted to create the temptation and then show how each character would approach it. One of the members of the group came up with the idea of showing the temptation through the use of an unopened box. The rest of the group were interested in this idea as we thought that it would help us to create intrigue for our audience. One of the things that the whole group were interested in putting into our piece was the use of monologues. A production of 'Road' that we went to see involved lots of monologue work and we all felt that this allowed the audience insight into the minds of certain characters and may help us create a more interesting piece of drama to watch. ...read more.

This type of activity kept motivation high in the group and meant that there were very often lots of fresh ideas coming to the surface which could later be built upon. Also, in early rehearsals we used hot-seating as a way of developing each of our characters. Through doing this each member was able to get a better idea of their own character, working out their social status and their status within the group of characters that would be in the waiting room and was therefore very effective. Another variation on the hot seating was to get the one character to act as an interviewer to each of the other group members, however, all of which were playing the interviewer's character as they perceived it. This had a similar effect to that of role swapping and again allowed each of us to see our own characters from a different perspective. These techniques were important to the development of our piece due to the fact that we wanted it be very much character driven, and so through these exercises we were able to build characters personalities, vocality, physicality and life background. After numerous rehearsals it became obvious that different group members saw the piece moving in different directions and so it was important that we sat down to discuss where exactly we wanted the piece to start, how it would move and where it would finish. After discussing each person's view on where they thought the piece was going we tried to focus once again on our initial aims and objectives to decide on a path to take. Over the period of rehearsals I found that it was important for me to use aspects of Stanislavski's system in order to create a more realistic performance. Firstly by putting myself in the given circumstances and using the 'magic if' I was able to use my imagination more effectively. ...read more.

It showed me that I am able to push myself and play a more serious role. The age difference between my character and myself made me more aware of my vocality and especially my physicality, and the way that I hold my body frame. The fact that this was a character driven piece also forced me into thinking more intensely about my character; how she would react and act to things, how she would speak, and how she would present herself. Each of these factors meant that my acting skills developed considerably over the course of this piece. By doing a realistic piece of drama I learnt efficient ways to apply Stanislavskian techniques into the rehearsal (and performance) process which I have not had the chance to do before. I found these techniques beneficial and would definitely use them again. My performance did fulfil the initial aim and objectives. Because of the research that went into the piece and all of the rehearsal techniques that were employed it meant that our performance presented the audience with a range of realistic characters. Awareness of Health and Safety issues * Fire exit lights will be on throughout each performance in so that if there was a need to use the exit it would be clearly marked * Make sure all fire exits are clear of any obstructions so that they are easy to exit in an emergency situation * Ensure that the seating for the audience is securely locked into position and that safety bars are also locked into place * Ensure all rostra used for the set is pobbed to prevent any accidents from occurring * Ensure the lighting rig is securely fixed with safety chains * Ensure floor space is free from sharp and protruding objects to prevent harm to members of the group * Any electrical cables will be taped to the floor and kept clearly out of the way of any cast members and/or audience members * Ensure that all chairs and other items of furniture are away from the edges of the rostra to prevent any accidents that may occur ...read more.