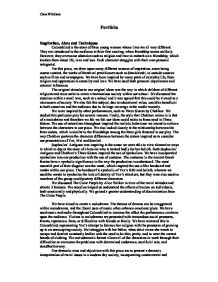 The original stimulus to our original ideas was the way in which children of different religions and races unite to create a harmonious society within our school. We discussed the situation within a small area, such as a school

Portfolio Inspiration, Aims and Techniques Colourblind is the story of three young women whose lives are all very different. They are introduced to the audience at their first meeting, when friendship seems unlikely. However, they overcome obstacles such as religion and race to embark on a friendship, which teaches them about life, love and loss. Each character struggles with their own personal antagonist. For this piece, we drew upon many different sources of inspiration, some being course content, the works of theatrical practitioners such as Stanislavski, to outside sources such as films and newspapers. We have been inspired by many parts of everyday life, from religion and oppression to sexuality and love. We have used both personal experiences and external influences. The original stimulus to our original ideas was the way in which children of different religions and races unite to create a harmonious society within our school. We discussed the situation within a small area, such as a school and it was agreed that this could be viewed as a microcosm of society. We also felt this subject, due to educational value, could be beneficial to both ourselves and the audience due to its large coverage in the media recently. We were inspired by other performances, such as Three Sisters by Chekhov. We studied this particular play for several reasons. Firstly, the style that Chekhov writes in is that of a melodrama and therefore we felt we felt our ideas could relate to those used in Three Sisters. The use of naturalism throughout inspired the realistic behaviour we intend to achieve between the charcaters in our piece. We also looked closely at the relationship between the three sisters, which is similar to the friendships among the three girls featured in our play. The way Chekhov portrays the character differences between the sisters inspired us to consider our presentation of Yaz, Mel and Scarlett. ...read more.

The group decided this genre was most suitable for the presentation of our themes and styles. Each charcater struggles with their own antagonist throughout the play, leading to all beginning an emotional journey. We have represented different ideas and emotions with the use of music, poetry, sound effects and both stylised and choreographed movement. However, Colourblind differs from a typical melodrama, which most often conclude with a happy ending. We felt this would be to clich� and thus opted for a sombre and more mysterious conclusion. Although there are natural scenes within our performance, it cannot be consider naturalistic due to many of the techniques we have used. The use of music and poetry, actors' playing multiple roles and verious techniques such as freezeframes and monologues creates a dramatic piece with surrealistic and symbolic attributes. Surrealism is an artistic and dramatic movement that aims for the liberation of the mind by emphasizing the critical and imaginative powers of the unconscious. It originated in early-twentieth century Europe. Surrealism was a revolutionary movement encompassing actions intended to advance radical political, social, cultural and personal change. This mirrors the aim of Colourblind to advance social and personal beliefs on each of our themes - oppression, r****m and social pressures. Skills Development We planned our rehersal time so the majority would be spent improvising and acting. When we began to devise Colourblind, our lessons were begun with a warm-up and a lengthy discussion about possible ideas and characaters, which was combined with trying our ideas out. Once we established a basic plot and our charcaters, our lessons were constructed by beginning with a warm-up, a short discussion and the rest of the lesson spent rehearsing scenes and improvising. We felt the piece would be stronger if created from trial and error. Communication between group members is vital to produce a professinal and high-standard working environment. Every decision must be approached as a group and each idea discussed openly and fairly. ...read more.

I feel our original aims have been successfully completed. We have devised an educational, yet entertaining piece, which is successful in making people aware of false stereotypes. It also questions the audience's values and beliefs. Our aims have progressed to portraying the Muslim faith, domestic violence and r****m, as well as other sensitive subjects, as honestly and openly as possible, whilst treating each subject delicately and with as much accuracy as possible. Health and Safety Health and safety should be considered at all times. There are general rules, which should always be followed to ensure a safe working environment; Each person is responsible for both their safety and that of others. For example, behaving in a responsible manner is necessery throughout all rehersals and the performance and a careful and considerate approach should be taken at all times, for example; the stabilty of raised areas should be checked before use. Communication between group members and members of staff is very important in creating a safe area in which to reherse. No person should take excessive risks without supervision and if a potential hazard is recognised, attention from a member of staff should be drawn towards it immediately. Whilst rehersing, the group should partake it both vocal and physical warm-up's to avoid injuring ourselves. We should always wear loose fitting and comfortable clothes and avoid walking around in bare feet due to the chance of props and pieces of set lying around. Whilst rehersing, we must always make sure loose wires, sharp corners and objects are safely covered or removed entirely incase of potential accidents. The group should all be made aware of cables and wiring, which should be taped at all times and power should not be switched on unless necessery. No naked flames should be used without the supervision of a member of staff and the location of fire exits should be made known to each person. Individually, and as a group I feel we have successfully followed the health and safety guidelines and never knowingly put ourselves or another person in danger. ...read more.