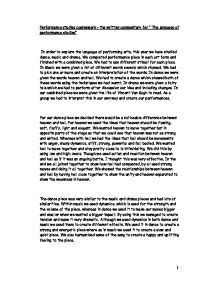 Performance studies coursework - the written commentary for " The language of performance studies" In order to explore the language of performing arts, this year we have studied dance, music and drama. We completed performance piece in each art form and finished with a combined piece. We had to use different stimuli for each piece. In Music we were given a list of different words several which rhymed. We had to pick one or more and create an interpretation of the words. In dance we were given the words heaven and hell. We had to create a dance which showed both of these words using the techniques we had learnt. In drama we were given a fairy tale which we had to perform after discussion our idea and including changes. In our combined piece we were given the life of Vincent Van Gogh to read. As a group we had to interpret this in our own way and create our performances. For our dance piece we decided there would be a noticeable difference between heaven and hell. For heaven we used the ideas that heaven should be flowing, soft, fluffy, light and elegant. We wanted heaven to move together but in opposite parts of the stage so that we could see that heaven was not as strong and united. ...read more.

In our dance piece we spent a lot longer as we found it harder to get everyone working together and to organise proxemics, motifs and choroerographic devices as we imagined. We decided that hell and heaven should unit and the end; making hell more powerful. We put in extra hours so that we could practise it and change bits which we didn't like or thought could be made better. In the combined piece we spent twice as long on this as music, dance or drama as we needed to include all three aspects of performance studies. We wanted it to be powerful, so we kept exploring new ideas until we were completely happy with our results. Within the rehearsal stage of music, we changed the idea of doing a sound scape to writing a song. We thought the language of song would communicate more easily our ideas for example "where for art thou Romeo?" we used this as love translation. Initially the sound scape sounded unrealistic and immature -the opposite image of that what we had tried to create. We changed the dynamics and added a harmony to improve this initially difficult piece. In the rehearsal stage of drama we changed a few of the beginning thoughts, as we changed some line to fit in with the end of the story. ...read more.

We achieved this and got a good response from both the audience and the teachers. If I could have changed a bit it would have been the bit with chairs, we tried to make this bit feel intimidating, however because we hadn't practiced it as much as would have like we didn't look like we new what was going to happen next. In music, dance and drama there are many similarities such as we used dynamics to build up tension, in music we slowed the song down at the beginning to give the piece more meaning at to add to the texture. In drama we also used dynamics to build up tension by using climax and anti-climax at the beginning when the narrators started to talk, we had a huge pause where the audience did not know what was going to happen. Finally we used dynamics in dance to create tension by using our spatial levels which created a climax as the audience where unsure of what to expect. Over all I think all of my performance went well. There were a few mistakes which we made but that is only to be expected. We can then learn by these mistakes to help us next time. If I could change one thing overall it would be to have practiced more, maybe in front of an audience so that when we came round to it, it wasn't so nerve-racking. Word count - 2,255 ?? ?? ?? ?? 1 ...read more.