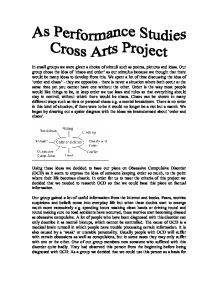 In small groups we were given a choice of stimuli such as poems, pictures and ideas. Our group chose the idea of 'chaos and order' as our stimulus because we thought that there would be many ideas to develop from this. We spent a lot of time discussing the idea of 'order and chaos' - they are opposites - there is never a situation where both occur at the same time yet you cannot have one without the other. Order is the way most people would like things to be, to keep order we use laws and rules so that everything should stay in control, without which there would be chaos. Chaos can be shown in many different ways such as riots or personal chaos e.g. a mental breakdown. There is no order in this kind of situation, if there were to be it would no longer be a riot but a march. We began by drawing out a spider diagram with the ideas we brainstormed about 'order and chaos'. Using these ideas we decided to base our piece on Obsessive Compulsive Disorder (OCD) as it seem to express the idea of someone keeping order so much, to the point where their life becomes chaotic. In order for us to meet the criteria of this project we decided that we needed to research OCD so that we could base this piece on factual information. Our group gained a lot of useful information from the Internet and books. Fears, worries suspicions and beliefs come into everyday life but when these doubts start to emerge much more excessively e.g. spending hours washing clean hands or driving round and round making sure no road accidents have occurred, these worries start becoming classed as obsessive compulsive. A lot of people who have been diagnosed with this disorder can only describe it as mental hiccups, which cannot be controlled. ...read more.

The reason we wanted this was because it was a good way to build the tension, and it represented these emotions of going from calm order into chaos. I think the tension really helped the audience experience and understand the overwhelming emotions that Kelly experiences. Our piece was devised with a huge dynamic range. This was because someone who suffers with OCD usually has an unstable personality. We wanted to explore these ups & downs and how emotions go from one extreme to another. Our piece therefore has a lot of climatic parts with in it. For example there is there is a climax twenty seconds into the opening dance piece because we wanted the audience to understand from the start that there is just as much chaos as there is order. We devised it in this particular way because we wanted to express how unpredictable and irrational this disorder can be. Kelly stood in one place doing a four-gesture action phrase to give the piece a sense of control and organisation, while the rest of us used different gesture and levels to confuse the order of the piece. Our group spent a lot of time working on the dialogue and physicality. We really wanted to express the conflicts of each character to an extreme point. We wanted to show the audience just how far we could take these characters so that the audience had a clear understanding of each of them. The dialogue in both drama and music dramatised our piece through the use of tone and pitch for example the coach raised her voice and added more anger to her tone so it increased the intensity of certain scenes. The physicality integrated all three art forms. Each of the four characters were completely very different and this was one of the things we wanted the audience to identify with. The dialogue was equally important to each character in their own way. ...read more.

It is something that I will think more about in future performances. I think that the final performance was much better then I had expected. I don't think there were any major mistakes that were obvious to the audience. I think that we had achieved our main aim, which was to inform and educate the audience about OCD through drama, dance and music. I think there were moments in which people including myself forgot what we were doing but we all supported each other when this happened. I think our timing was excellent during the song, which helped achieve that climax we were aiming for. Our performance did well in establishing the conflict between the characters because even while I was performing I could feel the tension, which was created by the resentment between Kelly and I during the song. I was really pleased by the audience feedback. The overall feedback was that we had all built strong characters. The characters made a powerful impact on the audience during the last two scenes where Kelly breaks down and is put in a psychiatric unit. The audience all agreed they felt compelled to make a judgement on each of the characters and the morality of the piece. This I think was very important because this objectivity was one thing that we worked to achieve. The audience did suggest that maybe it would have help if we had more rehearsal time as there were a few points during the piece that we each seemed unsure about. Finally the audience said it might have made more impact if we had explained the transition through the disorder further, through the addition of a few extra scenes. I think if we were able to do this piece again, I would have wanted to spend more time on rehearsing each scene so that we all had a more secure command of the piece. I also would agree that it would have been better if we had a few more scenes in which we could explain more about the disorder and the causes. By Victoria Barnes ...read more.