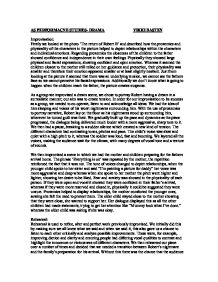 AS PERFORMACNE STUDIES- DRAMA VIKKI BASTEN Improvisation: Firstly we looked at the photo 'The return of Robert B' and described how the proxemics and physicality of the characters in the picture helped to depict relationships within the characters and individual emotions. Regarding proxemics the closeness of the children to the father showed confidence and independence in their own feelings. Physically they showed large physical and facial expressions, showing confidant and open emotion. Whereas it seemed the children closest to the mother still relied on her guidance and protection, their physicality was smaller and therefore their emotion appeared smaller or at least slightly hesitant. Just from looking at the picture it seemed that there was an underlying tension, we cannot see the fathers face so we cannot perceive his facial expressions. Additionally we don't know what is going to happen when the children reach the father, the picture creates suspense. As a group we improvised a dream scene, we chose to portray Robert having a dream in a surrealistic manner; our aim was to create tension. In order for our improvisation to be success as a group, we needed to co-operate, listen to and acknowledge all ideas. We had the idea of him sleeping and voices of his worst nightmares surrounding him. ...read more.

We initially did this by making sure we all knew what we said and when we said it, this also gave us a chance to listen to each other critically and analyse possible improvements. These were, for example, improving diction and clarity and ensuring people had differing vocal qualities to contrast and highlight the innocence or viciousness of different characters. We then rehearsed our piece over a number of times and decided that we needed a transition between Robert's nightmare and the family's preparation for his arrival. Without this there was the chance that the audience would loose focus and the atmosphere would be lost. Consequently we decided that each of the people talking to Robert in his nightmare would say their previous line and the walk one by one into their space. This way the audience would be able to listen properly to all the lines that had been said to Robert during his nightmare and the next person would be saying their line, almost as a distraction, as the previous person walked into their next position. After discussion, we decided that the audience would be positioned in a semi circle around us performing. This way they would feel the intensity of the nightmare as they would feel almost as though they are in it. ...read more.

This seemed effective as Robert's pain and confusion seemed only too much to put into words. In the second scene the audience noticed the effect of the proxemics; the mother figure was higher than the rest of the family, displaying her protective nature. The mother's hidden emotions created tension. The dialogue also added towards the creation of tension, the mother's repetition displayed the fact that she clearly was not ok. This made the audience feel pity for her as she obviously needed someone to confide in but her children needed someone to rely on and she had to be that person. There was underlying tension with the mother's continual repetition but this moment was broken suddenly, making the audience shocked as the mother shouted her dialogue with an outburst of uncontrollable emotion. The children's physicality was very carefree, clumsy and open, their arms and legs all seemed to have their own leases of life. Something was constantly moving, whether it be their tongue displaying concentration, or their hands fiddling it greatly showed their age and contrasted with the controlled physicality of the mother and eldest child. Considering all of the techniques discovered, characterisation, physicality, tension, proxemics, dialogue and objectives, they appeared to have had quite a positive effect on our overall performance. Once we were aware of what they were and their potential effect we were able to display emotions, meanings and relationships through many different and interesting ways. ...read more.