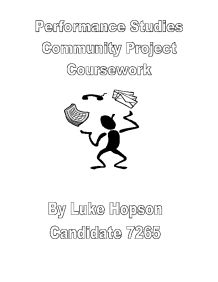 Contents 1: Performance Studies: Community Project Coursework 2: Appendices 1 - Map of Promenade 2 - Manuscript of 'Hide and Seek' song. 3 - Kings Monologue 4 - Newspaper Article Performance Studies: Community Project Coursework As part of our A-level community project we needed to choose an historical event or story as a theme. This included us doing a lot of intense research, as we also needed to find a venue that was relevant to the theme. Idea: We decided that the history of King Charles II was a subject that would really test us and enable us to be very creative. During our research we found out that King Charles had hidden at places such as Boscobel House, and Mosley Old Hall, when on the run from Oliver Cromwell during the civil war. We finally chose Mosley Old Hall as our setting because the people there were very co-operative and forth coming in allowing us to rehearse and perform there. Initially, we visited Mosley and looked around, making notes as we went. It vastly improved our knowledge and understanding of the events that took place during that period of time, whilst getting us to start thinking of possibilities that we could include in our performance. For instance, we noticed some equally space trees in the garden, and instantly thought of the possibility of a 'Hide and Seek' style dance routine. Ironically 'Hide and Seek' became the inspiration for the whole piece. Exploration: Before we started to explore our ideas we decided we needed to outline our intentions, and what we hoped to achieve through the piece. Our aim was to tell the story with a contemporary edge to entertain a modern audience. We planned to devise and perform an original piece that would leave some questions unanswered, to play on the audience's minds and make them think. This was a technique often used by Bertolt Brecht, who went on to have a big influence on our final piece. ...read more.

The relevant lyrics and simple manuscript of the piece can be viewed in appendix 2. As you can see from the map (appendix 1) the song would lead the audience to the wall where the 'Thomas and William' scene would take place. We developed this scene into a more believable piece of theatre by producing a set script and used body language and facial expressions to reflect the cold weather the children would be feeling at that moment. We developed our 'hide and seek' dance by dividing it into two halves. In the childlike first half we developed the characters the dance would be performed by and their gestures and movements by carrying out an exercise that involved us hiding. We improvised ways of travel using childlike skipping and clumsy movements whilst keeping them stylised. We experimented with the use of various techniques such as delivering movements in cannon to create a game of 'Tag' and revealing ourselves to the audience in unison, peeping around trees. The use of these techniques was an idea taken from a previous improvised piece of samba drumming that taught us how to use them and we created a link across the art forms by adapting them to influence our dance. The second half of the dance took on a more sinister feel as we wished to portray the king in hiding from the deadly clutches of Oliver Cromwell. This provided a shocking contrast between the two halves and confused our audience. This was a Brechtian inspired aspect, as he wanted his audience to think about what they were seeing. We used exaggerated movements and physicality to create short solo pieces, a process we developed in previous drama workshops. Drama also taught us about spatial awareness and how to use proxemics in our work; this awareness of space was present throughout our dance. We then decided the music should change from playful Renaissance courtyard music to up to date dance music with a threatening vibe. ...read more.

It was interesting that some of the children in the audience understood what had gone on, more so than the older viewers. This proved that our childlike theme related to the audience it was aimed at. The unexpected traffic noise from the M6 motorway nearby unfortunately played a big factor in several scenes. For example the important lyrics in the promenade song (Appendix 2), could not be heard clearly over a combination of audience footsteps and rush hour traffic. One thing that I personally found hard was the ability to adapt from one character to another in quick succession, due to the episodic nature of the project. I overcame this by concentration and visualisation techniques. During my monologue (when portraying the part of the King), I was a little unsure of my words, so had to keep referring to my prompt sheet. This wasn't very professional and although I covered it well, I feel it prevented me from delivering the role to my full potential. Their was no lighting in the barn, just candle light, so this made the piece seem very abstract. We had no table for our news report, but we used this to our advantage as it made the setting very unnaturalistic. Something I would change given the opportunity to create another community project would be to start the rehearsal process a lot earlier, and try to rehearse as much at the performance venue as possible. This is so you could any necessary changes early on if needed. Apart from the sub-zero temperatures, which were not ideal, especially for the elderly members of the audience, I have really enjoy devising and performing this piece. It has helped to learn a lot of new techniques whilst increasing our historical knowledge of the society we live. It seemed to be a great success as we have even had an article published in the local paper regarding our exploits.(see Appendix 4) By Luke Hopson Candidate Number: 7265 ...read more.