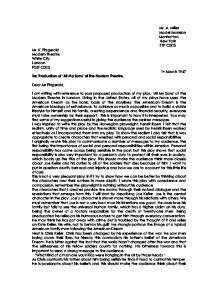 Re: Production of 'All My Sons' at the Modern Theatre. (Letter to the director)

Mr. A. Miller Model Mansion Manhattan New York Z1P C0D3 Mr. K. Fitzgerald Modern Theatre White City London P05T C0D3 1st March 1947 Re: Production of 'All My Sons' at the Modern Theatre. Dear Mr Fitzgerald, I am writing with reference to your proposed production of my play, 'All My Sons' at the Modern Theatre in London. Living in the United States, all of my plays have used the American Dream as the ironic basis of the storylines. The American Dream is the American ideology of self-reliance. To achieve as much as possible and to build a stable lifestyle for himself and his family, creating dependence and financial security, everyone must take ownership for their support. This is important to how it is interpreted. You may find some of my suggestions useful in giving the audience the desired messages. I was inspired to write this play by the Norwegian playwright, Henrik Ibsen. I felt that the realism, unity of time and place and the realistic language used by Henrik Ibsen worked effectively as I incorporated them into my play. To show the realism I also felt that is was appropriate to create characters that wrestled with personal and social responsibilities. I originally wrote this play to communicate a number of messages to my audience, the first being the importance of social and personal responsibilities within America. Personal responsibility has come across being sensible in the past, but this play shows that social responsibility is also very important for a person's duty to protect all their sons in society, which backs up the title of the play. ...read more.

Ann shares Chris' high ideals but still believes he should not be ashamed by his wealth. She decides to disown her father whom she believes to be guilty of the crime that Joe Keller committed. She has no wish to hurt Kate but will show her Larry's letter if she remains opposed to her marrying Chris. Jim Bayliss is a young successful doctor; he is also the Keller's neighbour. He shares Chris' ideals but has been forced to compromise to pay the bills. He is fair to his wife, but she knows how frustrated Jim feels. Jim's is the voice of disillusioned experience. If any character speaks as myself, it is Jim. Now we have George Deever, he is a soul mate of Chris'. George greatly admired Chris when they were younger. Like Chris, George was praised for his bravery in the war. The way he follows Chris is accepting that Steve is guilty, but now he approaches Chris for deceiving him. George is strong, serious and on the borderline of depression, this should be shown in his appearance. He is bitter because he has grown cynical about the ideals for which he sacrificed his own opportunities for happiness. I hope this will help you to stage the characters in a way that the audience will enjoy. The most important scenes in this play are in the beginning of act 1 where symbolism is used when the tree that was planted to remember Larry was knocked over by the wind. ...read more.

And I guess they were.' I intend to outline my requirements for the use of music, lighting and props. Props should be as real as possible. The colours should be more towards the darker colours to show the depressing atmosphere more vividly. Lighting should only be on the people in conversation, when the tension rises the characters faces should be more strained and the light should be brighter as if some one is being interrogated. Fast music with strong instruments should be played in the background every time an argument arises. Percussions should be sounded when the audience should receive a strong impact. Overall, I would like this play to be performed in such a way that the audience will leave your theatre questioning the behaviour of Joe Keller and whether what he did was morally correct. They should also think about their own actions and question whether they are prepared to let someone else live a live like Steve Deever just to save themselves. And how to be better and more considerate to the people around them. People should realise that their family is important but so is your duty to society. A diagram of the stage and backdrop is enclosed to give you a clearer guideline to what the Keller's back yard should look like. I wish you all the best with the production and hope this has helped you enough to make it enjoyable for yourself and the audience. Yours Sincerely Mr Arthur Miller ...read more.