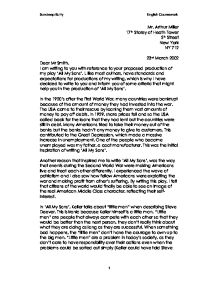 Dear Mr Smith, I am writing to you with reference to your proposed production of my play 'All My Sons'.

Mr. Arthur Miller 17th Storey of Heath Tower 5th Street New York NY 712 23rd March 2002 Dear Mr Smith, I am writing to you with reference to your proposed production of my play 'All My Sons'. I, like most authors, have standards and expectations for productions of my writing, which is why I have decided to write to you and inform you of some criteria that might help you in the production of 'All My Sons'. In the 1920's after the First World War, many countries were bankrupt because of the amount of money they had invested into the war. The USA came to their rescue by loaning them vast amounts of money to pay off debts. In 1929, share prices fell and so the USA called back for the loans that they had lent but the countries were still in debt. Many Americans tried to take their money out of the banks but the banks hadn't any money to give to customers. This contributed to the Great Depression, which made a massive increase in unemployment. One of the people who became unemployed was my father, a coat manufacturer. This was the initial inspiration of writing 'All My Sons'. Another reason that inspired me to write 'All My Sons', was the way that events during the Second World War were making Americans live and treat each other differently. I experienced the wave of patriotism and I also saw how fellow Americans were exploiting the war and making profit from other's suffering. By writing this play, I felt that citizens of the world would finally be able to see an image of the real American Middle Class character, reflecting their self-interest. In 'All My Sons', Keller talks about "little men" when describing Steve Deever. This is ironic because Keller himself is a little man. "Little men" are people that always compete with each other so that they would be better than the next person, they don't really think about what they are doing as long as they are successful. ...read more.

Chris is a completely contrasting character compared to his father, Keller. Their morals are totally different and I think Chris represents my principles the best. "...that's the kind of guys I had. They didn't die; they killed themselves for each other. I mean that exactly; a little more selfish and they'd've been here today." Chris believes that every man owes something to society, for these innocent men who gave their lives in the war. He feels guilty to have nice things because he knows that a man died so that you could have it. Chris loves his parents and wants to be a good son, but now he wants to live. He is in love with Ann, his brother's ex girlfriend. First he felt guilty to be in love with her, because if his brother hadn't of died in the war then she wouldn't be available, but now Chris realises he loves Ann very much. Keller is happy for them both as long as Chris takes the business from him as that is all he has worked for during his life. Kate thinks the idea is very wrong, as she still believes that Larry is going to come back. Chris wants Keller to make Kate get used to the idea that him and Ann are in love, or he will leave the business and move with Ann to New York and start a new life. I want people to respect Chris for having good morals, so he should wear smart clothes, which the audience will like. When Chris, walks around the stage, I want him to go right to the edges, to show that to him, the world is more than his forty foot garden. Ann Deever shares Chris's ideas about more social responsibility but believes he should not feel ashamed by his wealth. She believes Keller's father had nothing to do with the killing of the airmen, so she finds nothing wrong with Chris inheriting the business and the money. ...read more.

The broken tree is necessary to show that Larry may still be alive. It is for the Keller's to remember Larry. The garden chairs scattered around are important to show that there has been a great storm the night before and the mess shows the power of it. It is like an omen to Kate and Frank that it wasn't right to plant a memorial tree for Larry as he wasn't dead. This stage is good as it shows the unity of place, you don't need to go to a different place as everything can take place in the garden. I think appropriate music should be used for each scene to reflect the atmosphere. Perhaps a drum beating when Kate makes a mistake and tells George that Keller has never been sick, the drum could represent tension rising in the play and Keller's racing heart beat when he realises he might get caught out. The light should get slightly dimmer to show that the day is going on and the night is going to arrive. The grape drink is important in the play as it shows how Kate and George were really close during his childhood. 'All My Sons' is a reflection of real life of the American Middle Class and because of the reality of the play, there are a number of messages that will be communicated to the audience to make the play more effective. When the audience leave the theatre, I want them to reflect on what they have seen and compare their values with Keller's. When Keller sent off the detective plane parts to the army, I want the audience to question was he right to do as he was keeping the interests of his family in mind or was he wrong to do such a horrific thing as he was simply leading innocent men to their deaths. It will affect the audience greatly as they will probably also be middle class people like the characters on stage. Yours Faithfully Arthur Miller Sandeep Kutty English Coursework 1 ...read more.