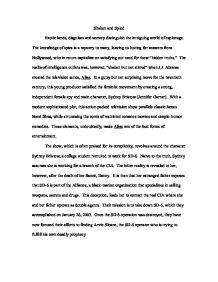 Shaken and Spied Exotic lands, disguises and secrecy distinguish the intriguing world of espionage. The knowledge of spies is a mystery to many, leaving us lusting for answers from Hollywood, who in return capitalize on satisfying our need for these "hidden truths." The realm of intelligence outlets was,[MSOffice1], however, "shaken but not stirred" when J.J. Abrams created the television series, Alias. In a gutsy but not surprising move for the twentieth century, this young producer satisfied the feminist movement by creating a strong, independent female spy and main character, Sydney Bristow (Jennifer Garner). With a modern sophisticated plot, this action-packed television show parallels classic James Bond films, while strumming the cords of restricted romance movies and simple-humor comedies. These elements, undoubtedly, make Alias one of the best forms of entertainment. The show, which is often praised for its complexity, revolves around the character Sydney Bristow, a college student recruited to work for SD-6. Naive to the truth, Sydney assumes she is working for a branch of the CIA. The bitter reality is revealed to her, however, after the death of her fianc�, Danny. It is then that her estranged father exposes that SD-6 is part of the Alliance, a black-market organization that specializes in selling weapons, secrets and drugs. ...read more.

In a predicament, she karate kicks one of her assailants, shoots out a window and flies through the hole she created, by the loss of cabin pressure, in the airplane. Whether Syd is scaling walls, free falling seventy feet or parachuting out of an airplane, this type of "insanity" makes the show more entertaining with each episode. A quality film or television show combines both action and romance. Romance is critical when creating equilibrium for the viewer, by establishing a balance of emotions. By having passionate characters, the audience can view them as relatable individuals. We can justify and even support the characters savage behavior because the romantic aspect of the show, too, has captivated us. Baz Luhrmann's film, Moulin Rouge, understood the importance of romance. The storyline revolves around a restricted relationship between the Courtesan Satine and Christian, a writer. The heart of this story is love; these two characters conduct their forbidden affair despite the consequences. Christian's strong feelings for Satine are witnessed in his jealousy when she is forced to sleep with the Duke. His torment, disgust and trust in their love is refreshing, and passionate. He mentions to her, "Come what may, I will love you till my dying day." ...read more.

Marshall, the SD-6 gadget guy, is an intelligent, fidgety, nervous and amusing character. While Marshall's antics are not strong slapstick his one-liners and corny jokes, are enough to lighten the usual dark dramatic scenes. For example, he explains how to use a camera disguised in a functioning lip-gloss container by giving a long drawn out explanation. He states, "Let's say you're at the beach and your lips are feeling a little -- 'My lips are chapped!'-- or you're possibly on a date, it's the end of the night and some smooching. You want your lips to be supple. Pistachio. That's my favorite flavor." It's his anxious, boyish antics that make him funny. Even Sydney, during "Phase One," threw out a one-liner as she posed as a prostitute. As she strangles the Russian for information, she comments about the lingerie: "What was wrong with the black one?" Alias, like many other dramas, capitalizes by using spouts of comedy to lighten the intense atmosphere of the show. Alias is a breathtaking spectacle for one's senses and emotions. Thriving on action and adventure, the show balances itself by intertwining both romance and comedy. Each episode becomes more thrilling than the next as Sydney sports new disguises and moves. In the end, the audience hopes to follow in her footsteps and one day be recruited to kick some butt, as she does competently each week. ...read more.