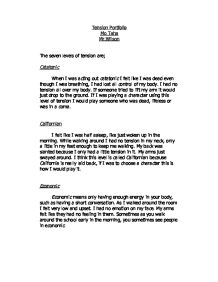 Tension Portfolio Mo Taha Mr.Wilson The seven levels of tension are; Catatonic When I was acting out catatonic I felt like I was dead even though I was breathing, I had lost all control of my body. I had no tension all over my body. If someone tried to lift my arm it would just drop to the ground. If I was playing a character using this level of tension I would play someone who was dead, lifeless or was in a coma. Californian I felt like I was half asleep, like just woken up in the morning. While walking around I had no tension in my neck, only a little in my feet enough to keep me walking. My back was slanted because I only had a little tension in it. My arms just swayed around. I think this level is called Californian because California is really laid back, if I was to choose a character this is how I would play it. Economic Economic means only having enough energy in your body, such as having a short conversation. As I walked around the room I felt very low and upset. I had no emotion on my face. My arms felt like they had no feeling in them. Sometimes as you walk around the school early in the morning, you sometimes see people in economic. ...read more.

They used good pace to alongside the tension levels. The 7 Sins The dictionary describes the 7 sins as: Pride 1 .A feeling of honour and self-respect; a sense of personal worth. 2. Excessive self-esteem; conceit. 3. A source of pride. 4. Satisfaction or pleasure taken in one's own or another's success, achievements, etc Wrath 1. Angry, violent, or stern indignation. 2. Vengeance or retribution. 3. Archaic a fit of anger or resulting from anger. Greed 1. Excessive consumption of or desire for food; gluttony. 2. Excessive desire, as for wealth or powder. Gluttony 1. A person devoted to eating and drinking in excess; greedy person. 2. Often ironical a person who has in appears to have a voracious appetite for something. Sloth 1. Reluctance to work or exert oneself. Envy 1. A feeling of grudging or somewhat admiring discontents aroused by the possessions, achievements or qualities of another. 2. The desire to have for oneself something possessed by another; covetousness. 3. An object of envy. Lust 1. A strong desire for sexual gratification. 2. A strong desire or drive. Greed Evaluation, Abstract Our Group Me, Nick, Nathan, Idriss, Ross & Harriet To show greed our group did a piece about two army generals who demand power, they have a greed for power. ...read more.

She wore a emotionless mask which was black, black trousers and a black robe. She wore all black because black represents death. Meredith walked around very slowly. I would say she was a tension level economic. As a class we chose where Meredith should walk, how slow she walked & what actions and gestures will she do as death. We decided that she should walk around each of the groups, putting her hand on there facing a using her hand tilt there head down as if she had killed them. In the background we had very strange eerie music such as church bells. Meredith done this to one person in each group in any random order, when she then finished she went up to the audience and did the hand action. I think the meaning to this piece is that any one can die at whatever age not just old people. What Would I Have Done If I Were Director If I was director there wouldn't be much I would change about the whole piece. The whole class had input on this piece. A few things that I would change is the way we people moved the chairs. I would ask them not to do it too loud. I would also have lighting to give more effect especially when Meredith goes up to the audience and does her hand action. I would have a blackout there. ...read more.