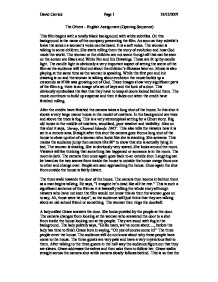 The Others - English Assignment (Opening Sequence)

The Others - English Assignment (Opening Sequence) This film begins with a totally black background with white subtitles. On this background is the name of the company presenting the film. As soon as they subtitle's leave the screen a woman's voice can be heard. It is a soft voice. The woman is talking to some children. She starts telling them the story of evolution and how God made the world. The woman or the children are not scene though all that can be seen on the screen are Black and White Pen and Ink Drawings. These are lit up by candle light. The candle light is obviously a very important aspect of setting the scene of the film as the audience will find out about the children's illnesses later on. Music is also playing at the same time as the woman is speaking. While the first pen and ink drawing is on and the woman is talking about evolution the music builds up a crescendo as if life was growing out of God. ...read more.

The woman is shaking. She is obviously very scared. She looks around the room. Viewers will be thinking that something has happened or someone is in the room. The room is dark. The camera then once again goes back to an outside shot. Laughing can be heard as the two scenes from inside the house to outside the house merge from one to other and change over. People are seen approaching the house. Once again the shot from outside the house is fairly distant. The three walk towards the door of the house. The camera then zooms in behind them as a man begins talking. He says, "I imagine he's dead like all the rest." This is such a significant sentence of the film as it is basically telling the whole story although viewers who have not seen the film would not know this as then the woman goes on to say, Ah, those were he days", so the audience will just think that they are talking about an old school friend or something. ...read more.

Grace tells the slaves how the old slaves had just vanished without picking up their wages this makes the audience think slightly about what happened to the old slaves. Grace goes through the daily agenda with the slaves. Then she makes a point about locking all the doors behind themselves but does not give a reason why. The audience will once again be wondering what is going on. One of the slaves asks Grace about where her husband is and she tells them that he went to war a year and a half ago. Grace also comments on how silence is such an important thing in her house due to her migraine problems. This is quite subtle telling the audience about her liking silence when she really enjoys the silence because she is a ghost. She does this so as not to give the story away. Grace then offers to show the slaves round the rest of the house. One slave comments that there is no need which is quite a strange thing to do when they are applying for jobs as slaves. This will get the audience thinking about whter they have been to the house before etc. David Carrick Page 1 18/12/2007 ...read more.