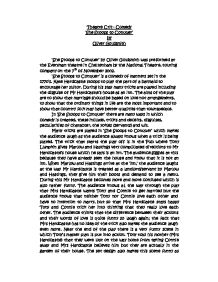 Theatre Crit - Comedy 'She Stoops to Conquer' by Oliver Goldsmith.

Theatre Crit - Comedy 'She Stoops to Conquer' by Oliver Goldsmith 'She Stoops to Conquer' by Oliver Goldsmith was preformed at the Everyman theatre in Cheltenham by the National Theatre, touring company on the 7th of November 2002. 'She Stoops to Conquer' is a comedy of manners set in the 1770's. Kate Hardcastle stoops to play the part of a barmaid to encourage her suitor. During his stay many tricks are played including the disguise of Mr Hardcastle's house as an inn. The aims of the play are to show that marriage should be based on love not arrangements, to show that the ordinary things in life are the most important and to show that country folk may have better qualities than townspeople. In 'She Stoops to Conquer' there are many ways in which comedy is created, these include, tricks and deceits, disguises, peculiarities of character, the yokles (servants) and wit. Many tricks are played in 'She Stoops to Conquer' which makes the audience laugh as the audience always knows when a trick is being played. The trick that starts the play off is in the Pub where Tony Lumpkin gives Marlow and Hastings very complicated directions to Mr Hardcastle's house which he says is an inn. ...read more.

Tony then plays another deceitful trick when he tells Mrs Hardcastle to pretend that the jewels have been taken, which we know they have. We laugh at her panic as she realises this, and find it even more amusing when Tony pretends to be playing along with it. The funniest part of the jewels trick though is the way it backfires; they are passed from one person to another before ending up with Mrs Hardcastle again. The many disguises in 'She Stoops to Conquer' also add to the comedy. The disguises include, Kate dressing as a barmaid to try and make Marlow like her, the audience giggles at how differently Marlow acts when he is with Kate the barmaid and 'grand' Kate. When Marlow is with 'grand' Kate he is shy and stutters but when he is with Kate the barmaid he is no longer shy and is rather flirtatious. Even though the audience knew that the barmaid was Kate dressed up they could see why Marlow might think otherwise because Kate was well covered when he met her first and when she is pretending to be a barmaid she uses a different voice that makes her seem 'inferior' to him which makes him feel more comfortable. ...read more.

The actors also kept eye contact with the audience and spoke to them rather than the other actors this made the audience feel that they were being involved with what was going on stage rather than just watching it, which was good because it made the audience laugh more than they would have without it. These appeared to be the only aspects comedy contained in "She Stoops to Conquer" and I thought that it was performed very well. The fast pace of a comedy was kept and the majority of the entrances and exits were fast. The scene changes were very quick so that the pace of the comedy was kept. I believed that the actors suited their roles very well and any comic moments or scenes were acted in the most suitable way, whether it be naturalistic or other. Overall, I found the play very enjoyable and funny, as did it seem the rest of the audience did. There was tremendous laughter at the many lines and humorous situations that were shown on the stage and it seemed to me that everyone enjoyed the performance and for this reason, I believe that the performance of "She Stoops to Conquer" by the National Theatre Touring Company at the Everyman Theatre in Cheltenham was a great success. ...read more.