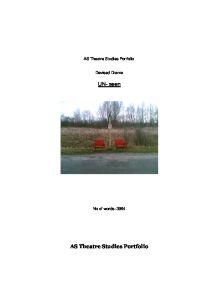 AS Theatre Studies Portfolio Devised Drama UN- seen No of words: 3984 AS Theatre Studies Portfolio Aims Our aim is to produce a realistic piece of drama which is amusing through its truthful observation. Our production should lead the audience to believe that we are young people looking for love on the internet, who for many different reasons cannot face real life and real relationships. Thus, in watching this piece of drama the audience should question themselves why we are sometimes afraid of other people. They should also relate to their own lives and be amused by the accuracy with which we perform; they should recognise elements of themselves in our characters. In order for this to work we need to include the audience in our journey as much as ourselves. They need to feel sorry for Sophie, who cannot take her life in her own hands and by the end of the piece feel relieved that at last she finds someone. To produce humour we create increasingly confused situations which should be believable. What we also would like to show is the contrast between the characters (two opposite female characters: shy and self- confident). All of these things would mean that the audience engages with the piece and think about themselves, which will make the performance both entertaining and educative. Research In research for this play, there were many things which I needed to consider. In relating back to my aims, I gave myself strong guidelines on what to research. Firstly, in order to gain amusement from the audience through view of themselves in the characters I needed to portray my part as shy, neurotic young woman looking for love in the internet as realistically as possible. To help I logged on as my character to a "dating service". I was trying to answer every message I received staying in my character and I observed how different people reacted on conversation with Sophie. ...read more.

We decided to use this fact in our play and my character is foreign as well. However I had to improve the clarity of my English pronunciation. A voice- exercise which I found really useful was repeating my lines with the tongue outside of my mouth, or with a cap between my teeth trying to sound as clear as possible. I realized that after this exercises I can control my voice better because I put more pressure on voice-clarity. I think the difference can be heard. The physicality of my drama in many ways has improved. Playing the part of Sophie will prove very demanding in that she is a very quiet character in vocal and physical areas, so a careful approach to her is needed here. The use of naturalistic physical expression is a key here and in the use of Stanislavski techniques I have made this area of my performance tighter. As Sophie is a very shy, reserved character, I would like to develop a more acute sense of body language on stage. In doing this I will show the audience Sophie's emotions through movements instead of speech. Scenes which required more movements than words are above all "in front of computer" scenes and the "caf� scene". In the internet scenes Sophie is scared and surprised by people bombarding her. On the dating web-site she is not less shy than in real life. As Sophie I will sit with uncrossed legs, toes pointing inside, playing nervously with my hands, touching hair and knees. In the "caf� scene" Sophie sits in the background and does not say anything. My movement will be in many ways similar to this from the previous scenes, however when Sophie realizes her worries are coming true- her date did not turn up- I want to look really sad, with tears in my eyes and nervously- touching my face and hair. ...read more.

During the set build we were always sure that everyone knew exactly what to do and has his own job, to prevent crowding (dangerous when moving heavy objects). Lights had been carefully fixed to bars and checked maximum 20 kg per metre along with being attached by a clamp or chain. During working with a ladder there was always another person helping with balance by holding the ladder. In case of the fire we minimise the audience number (to prevent overcrowding) and made sure that fire exits were clearly marked and easily accessed. We didn't forget about warming-up before each rehearsal to keep ourselves away from any injury. Evaluation In terms of the audience, I felt that our play had a good effect on them. They laughed at all the intended moments in the play and seemed interested and intrigued throughout. The beginning of the play with internet conversation between Kiki and her boss with a spot-light grabbed the audience attention immediately. We managed to keep the play going on slickly and therefore not causing the audience to lose concentration. However there were a few flimsy areas in the production. In the "first log-on" scene, when we were changing characters to show how many different and strange people we can meet on dating web-sites, I felt that we should do more work on that in order to make it quicker and more remarkable. However I do feel that the elements of people's fear, confusion made by internet relations and resolution in real life were shown very clearly. In working in this project I have learnt that in devised drama, open minds and strong commitment are the most important areas. Open minds because a willingness to try things out means that all ideas are discussed and therefore the result is more meticulous finished product. Strong commitment means that everyone is going in the same direction, therefore with more eager hands in the production, the weight and pressure is not left on one person. Keen and open minds are the most effective in any type of theatre. ...read more.