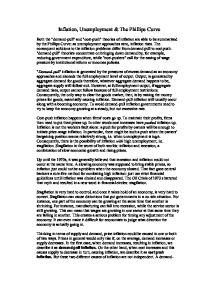 Inflation, Unemployment & The Phillips Curve Both the "demand-pull" and "cost-push" theories of inflation are able to be summarized by the Phillips Curve: as unemployment approaches zero, inflation rises. The consequent solutions to the inflation problems differ from demand pull to cost push: "demand-pull" theorists concentrate on bringing down demand by, for example, reducing government expenditure, while "cost-pushers" call for the easing of wage pressure by institutional reform or incomes policies. "Demand-pull" inflation is generated by the pressures of excess demand as an economy approaches and exceeds the full employment level of output. Output, is generated by aggregate demand for goods therefore, whatever aggregate demand happens to be, aggregate supply will follow suit. However, at full employment output, if aggregate demand rises, output cannot follow because of full employment restrictions. Consequently, the only way to clear the goods market, then, is by raising the money prices for goods, essentially causing inflation. Demand-pull inflation will usually occur along with a booming economy. To avoid demand-pull inflation governments need to try to keep the economy growing at a steady, but not excessive rate. ...read more.

Prices in general would only rise if, on the average, demand increases or supply decreases. In the first case, when demand increases, resulting in inflation, we describe it as demand pull inflation. On the other hand, when cost increases and this causes supply to decrease in turn, causing inflation, we describe it as cost push inflation. But these two different causes of inflation are not independent. A demand-pull inflation may itself lead to cost increases, which then give rise to further cost-push inflation. Hyperinflation refers to a very rapid, very large increase in the price level. This has happened in many societies throughout history. For example in Germany after World War 1, the government responded to the poor standing of the economy by printing money to replace the lost revenues. This was the beginning of a vicious circle. Each increase in the quantity of money in circulation brought about a further inflation of prices, reducing the purchasing power of incomes and revenues, and leading to more printing of money. In the extreme, the monetary system simply collapses. One source says that, "People might buy a bottle of wine in the expectation that on the following morning, the empty bottle could be sold for more than it had cost when full." ...read more.