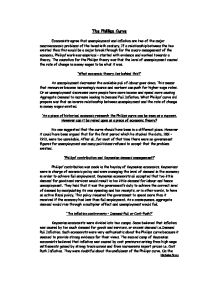 The Phillips Curve Economists agree that unemployment and inflation are two of the major macroeconomic problems of the twentieth century. If a relationship between the two existed then this would be a major break through for the macro management of the economy. Phillips' work was empirical - started with evidence and worked towards a theory. The causation for the Phillips theory was that the level of unemployment caused the rate of change in money wages to be what it was. 'What economic theory lies behind this?' As unemployment decreases the available pull of labour goes down. This means that resources become increasingly scarce and workers can push for higher wage rates. Or as unemployment decreases more people have more income and spend more causing Aggregate Demand to increase leading to Demand Pull Inflation. What Phillips' curve did propose was that an inverse relationship between unemployment and the rate of change in money wages existed. 'As a piece of historical economic research the Phillips curve can be seen as a success. However can it be relied upon as a piece of economic theory?' No one suggested that the curve should have been in a different place. However it could have been argued that for the first period which he studied the data, 1861 - 1913, were too unreliable. ...read more.

They needed to know when any further increase in demand for goods would exceed the capacity of the economy to produce those goods. The Phillips curve suggested that unemployment itself was that measure because of the correlation with inflation. Inflationary pressure was the signal that capacity had been reached. However it is by no means inevitable that the level of unemployment should be a good indicator of capacity; unemployment is the excess supply of labour. It seems that unemployment was only a good indicator in the early 1960s because when unemployment was low, there would be lots of unfilled vacancies. More people than were available were needed to produce additional goods and services, which showed there was an excess demand in goods and services. This correlation seems to have become much weaker. 'The short run Phillips curve and its breakdown?' Still it is important to note that in any one year the combination of wage inflation and unemployment might be some way from the cure. What was impressive was that over a number of years the discrepancies more or less cancelled each other out - the positive errors were matched by the negative errors. The years following the publication illustrated this perfectly, between 1959 and 1966 the results showed a remarkable confirmation of the Phillips curve. ...read more.

However as we know there is only one long run Phillips curve which is vertical at the natural rate of unemployment. This suggests that in the long run no trade off between unemployment and inflation is possible. So in this case governments ought to accept higher unemployment because when it is above the natural rate it will reduce inflation and the higher unemployment will only be temporary. It seems that Friedman's theory has had considerable influence. Low inflation today could be ascribed, however, to quite different factors. It could be that the 'cost-push' theorists are right and that unemployment reduces the inflation by means of reducing wage pressures from trade unions. Or the 'demand-pull' school could be correct in which case unemployment has reduced inflation by reducing aggregate demand. This suggests that when unemployment falls the rate of inflation will rise again. Advancing further there are theories which move away from the Phillips curve entirely, even in the short run. Such a theory is called rational expectations. It was argued that if wage negotiators knew that the government had adopted appropriate anti-inflation policies it would reduce wage settlements. Employers and unions would know that inflation was going to come down because of appropriate government policy. The pain of economic adjustment would be much less and unemployment would not have to rise so much. Yet when such a theory is applied to inflation and unemployment it seems too optimistic. ...read more.