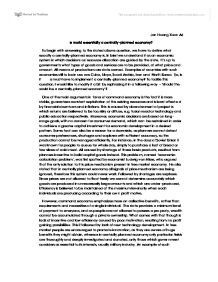 He also stated that in centrally planned economy all signals of price mechanism are being ignored, therefore this system could never work. Followed by shortages are surpluses. Since prices are not allowed to float freely we cannot determine accurately which goods are produced in unnecessarily large amounts and which are under-produced. Efficiency is believed to be maintained at the maximum level only when each individuals are producing according to their own profit motive. However, command economy emphasizes more on collective benefits , rather than requirements and necessities of a single individual. The state provides a minimum level of payment to everyone, and as people are not allowed to possess a property, wealth cannot be accumulated through a private ownership. What comes with that though is lack of incentive and low efficiency caused by poor motivation, resulting from no profit gaining possibilities. This if followed by lack of new technology development. ...read more.

On the basis of preceding discussion it can be concluded that centrally planned economy has both it positive and negative sides. It is up to us to outweigh those two sides and choose 'the lesser evil'. In my opinion by all means should we end the presence of command economy, as there is no essentiality in its participation in a global market. Currently most countries have chosen to support and act according to free market laws, for what reason I am extremely glad, as being a demanding and fastidious consumer I opt to select goods of high quality and affordable price. And only free market economy can guarantee me such a possibility. To end my essay, I would like to quote an American writer, George Glider, who once said, 'A successful economy depends on the proliferation of the rich, on creating a large class of risk-taking men who are willing to shun the easy channels of a comfortable life in order to create new enterprise, win huge profits, and invest them again.' ...read more.